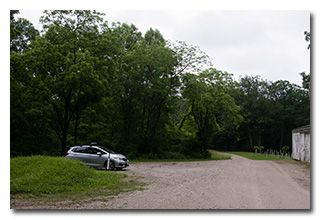 On Friday, June 11, 2021, one member of the Southeast Ohio Radio Adventure Team performed a successful impromptu activation of Waterloo Wildlife Area in Ohio as part of the Parks on the Air (POTA; link) program.

On a gray, drizzly morning, Eric McFadden, WD8RIF, returned to the Waterloo Wildlife Area garage/service-area, arriving at about 1500 UTC. While the small dogs Theo and Mindy explored, Eric deployed his 28½' wire antenna on his 31' Jackite telescoping fiberglass mast and drive-on base and, because of the drizzle and threat of heavier rain, set up his KX3 inside the car. Eric was on the air at 1517 UTC. 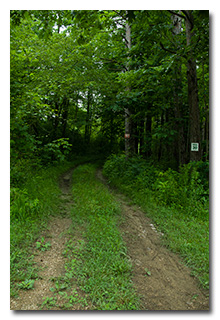 Eric began operations by looking on POTA Spots for possible P2P QSOs and at 1520 UTC he made a P2P QSO on 30m with KD1JT who was activating Dinosaur State Park (K-1663) in Connecticut. This was followed at 1522 UTC with a P2P QSO on 40m with WB2SMK who was activating Erie Canalway Heritage Corridor National Park Reserve (K-6532) in New York.

Finding his own frequency on 40m, Eric made five QSOs in about ten minutes.

Pausing to check for P2P opportunities, Eric made a P2P QSO on 20m with K4NYM who was activating Seminole State Forest (K-4639) in Florida.

Returning to 40m, Eric made five QSOs in four minutes.

Nearly finished, and pausing again to check for P2P opportunities, Eric made a P2P QSO on 20m with K0WRY who was activating Sandhills State Park (K-2351) in Kansas.

In all, Eric made fourteen QSOs, including four P2P QSOs, in just over half an hour. All of Eric's QSOs were CW and were made at the 5-watt level.