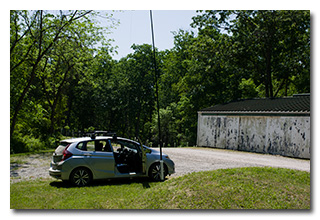 On Sunday, May 23, 2021, one member of the Southeast Ohio Radio Adventure Team performed a successful activation of Waterloo Wildlife Area in Ohio as part of the Parks on the Air (POTA; link) program.

Because of available cell-signal, Eric McFadden, WD8RIF, chose to return to the garage/service-area, arriving at 1530 UTC. While his two little dogs, Theo and Mindy, played, Eric deployed his 28½' wire antenna on his 31' Jackite telescoping fiberglass mast and drive-on base. Because Eric had forgotten to grab his folding camp-chairs when he left home, he set up his KX3 inside the car. Eric was on the air at 1545 UTC.

Eric began operations by looking on POTA Spots for possible P2P QSOs and almost immediately made a P2P QSO on 20m with N4CD who was activating McClellan-Kerr Wildlife Management Area (K-6359) in Oklahoma.

Finding his own frequency on 40m, Eric made six QSOs in about fifteen minutes. This run included a P2P QSO with N1RBN who was performing a three-fer activation of Chattahoochee-Oconee National Forest (K-4473), Chattahoochee Wildlife Management Area (K-7447), and Appalachian Trail National Scenic Trail (K-4556) in Georgia.

Pausing to check for P2P opportunities, Eric made a P2P QSO on 30m with N4CD who was still at McClellan-Kerr Wildlife Management Area (K-6359) in Oklahoma.

Returning to his frequency on 40m to resume his run there, Eric finished his activation by making five QSOs in five minutes. This run included a P2P QSO with K0BWR who was activating Weston Bend State Park (K-1796) in Missouri.

In all, Eric made thirteen QSOs, including six P2P QSOs, in about half an hour. All of Eric's QSOs were CW and were made at the 5-watt level.