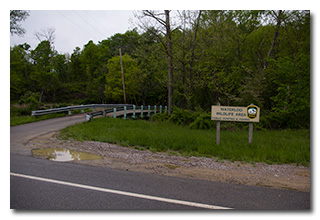 On a cold, rainy Sunday, May 9, 2021, one member of the Southeast Ohio Radio Adventure Team performed a successful activation of Waterloo Wildlife Area in Ohio as part of the Parks on the Air (POTA; link) program.

Eric McFadden, WD8RIF, drove along the ridgetop and arrived at his intended destination, the former site of the fire-tower, but found that cell-signal there was either very weak or non-existent at this location, different from his prior activation at this location. Eric had noticed good cell-signal at the forest's garage area as he passed it on the way out, and he returned the way he had come, arriving at the forest's garage area about 1430 UTC. Finding the parking area empty and free of power lines, and with good cell-signal available, Eric chose to set up there and quickly deployed his 28½' wire antenna on his 31' Jackite telescoping fiberglass mast and drive-on base and, because of the rain, set up his KX3 inside the car. Eric was on the air at 1439 UTC. 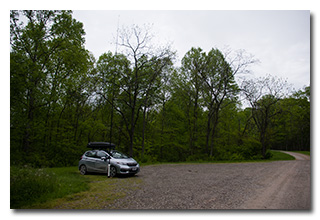 The excellent cell-signal at this location allowed Eric to use the POTA Spots website (link) to spot himself and to look for possible park-to-park (P2P) QSOs.

Eric began operations on 40m and made eight QSOs in about eleven minutes.

Pausing to check POTA Spots, Eric made a P2P QSO on 40m with K9VEG who was activating Leesylvania State Park (K-1307) in Virginia.

Again running his own frequency on 40m, Eric made two more QSOs on 40m in short order.

Once again pausing to check POTA Spots, Eric made a P2P QSO on 20m with N4CD who was activating Holland Bottoms Wildlife Management Area (K-7294) in Arkansas.

Returning to run his own frequency on 40m, Eric made another six QSOs in about six minutes.

Checking POTA Spots one final time, Eric made a P2P QSO on 20m with WA3QLF who was activating Cameron Praire National Wildlife Refuge in Louisiana.

In all, Eric made nineteen QSOs, with three P2P QSOs, in about thirty-five minutes. All of Eric's QSOs were CW and were made at the 5-watt level.