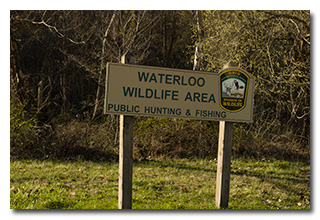 Eric McFadden, WD8RIF, having been notified that morning that Waterloo Wildlife Area had been made an eligible unit within POTA, had decided he must do a "first-day" activation of the new unit. As soon as his workday had ended and he had eaten some dinner, he put the little dogs, Theo and Mindy, in the car and drove the short distance to Waterloo Wildlife Area. Eric had hoped to perform this activation at the the former site of the Waterloo fire tower—the tower had been removed from Waterloo Forest several years prior to be re-erected at the Wayne National Forest Headquarters—and, upon arriving there, was happy to find the area empty except for one unoccupied car. Eric chose a place to park and quickly deployed his 28½' wire antenna on his 31' Jackite telescoping fiberglass mast and drive-on base and, because of the dropping temperatures and the need for this to be quick activation, set up his KX3 inside the car. Eric was on the air at 2229 UTC. 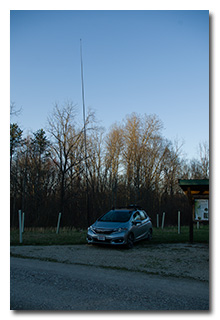 Eric had not known whether he would find cell-signal anywhere within Waterloo Wildlife Area and was pleased to find he had sufficient cell-signal to use the POTA Spots website (link) to spot himself and to look for possible park-to-park (P2P) QSOs.

Because of the need to validate this activation by making at least ten QSOs before the end of the UTC day about ninety minutes away, Eric decided against first hunting for P2P QSOs and began operations by running a frequency on 80m, managing to make a QSO with his friend K8RAT in Ohio and immediately thereafter with K3MRK in Pennsylvania.

Switching to 40m, Eric easily made twenty-five QSOs in just about half an hour. This run included a second QSO with his friend K8RAT, a QSO with signal-strengths at both ends being "ESP Level".

After the run on 40m, and after receiving a text from his friend K4SWL in North Carolina asking him to return to 80m, Eric did return to 80m to complete an easy QSO with K4SWL.

At this point, Eric checked POTA Spots for possible P2P QSOs and succeeded in making a P2P QSO on 30m with KW5CW who was activating Eisenhower Birthplace State Historic Site (K-6553) in Texas.

In all, Eric made twenty-nine QSOs in about forty-five minutes. All of Eric's QSOs were CW and were made at the 5-watt level. 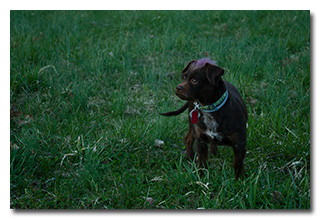