Killbuck Marsh Wildlife Area is a 5,703-acre state wildlife area located 2 miles east of Shreve. The property is in Holmes and Wayne counties. 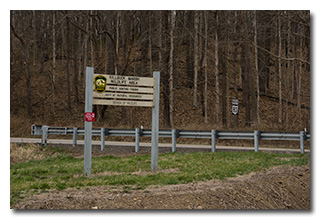 Eric McFadden, WD8RIF, arrived at parking area 22 (P-22) in Killbuck Marsh Wildlife Area to find the parking area completely empty. Eric chose a place to park on one edge of the parking area and deployed his 28½' wire antenna on his 31' Jackite telescoping fiberglass mast and drive-on base and, because of the cool temperature and the possibility of gusty winds, set up his KX3 inside the car. Eric was on the air at 1644 UTC. 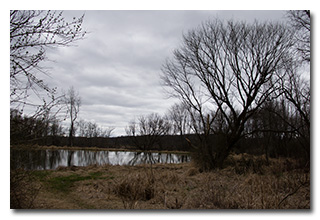 While Eric was setting up, he left the two little dogs, Theo and Mindy, free to wander around. Because of the parking area's very close proximity to Ohio Route 83, Eric put the two dogs back inside the car when he began actual operations.

Having expected to find no cell-signal whatsoever at this park, Eric was surprised to find he had excellent cell-signal and was able to spot himself to the POTA Spots website (link) and to look for possible park-to-park (P2P) QSOs.

Eric began operations by looking for possible P2P QSOs but found none at that particular moment.

Eric found his own frequency on 80m and managed to make just two QSOs there over a period of about seven minutes. Eric was pleased he was able to complete a QSO on 80m with his friend Mike, K8RAT, who was only 46 straight-line miles away. 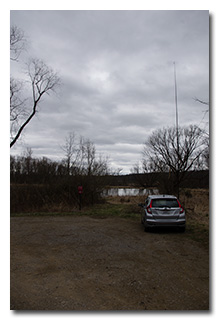 Switching to 40m, Eric mananged to make seven QSOs in about seventeen minutes. Normally, 40m is Eric's "bread and butter" band and he can usually easily make more than ten QSOs on 40m in short order. Given that this park had not previously been activated using CW, Eric was disappointed at the low QSO rate on 40m, and began to realize that poor HF propagation might be a problem on this day.

Switching to 20m, Eric made a surprising eight QSOs in twelve minutes. This run included a QSO with VO1AW in Newfoundland, a QSO with W6LEN in California, and a QSO with EA7TG in Spain.

Switching to 30m, Eric made four QSOs in about eight minutes.

Having another park to visit before heading south for home, Eric went QRT at 1728 UTC, did some photography, and tore down the station.

In all, Eric made twenty-one QSOs in about forty-four minutes. All of Eric's QSOs were CW and were made at the 5-watt level.