The creeks and permanent marshes on the area support mainly roughfish with small numbers of panfish. Mallard, wood duck, muskrat, raccoon, and cottontail rabbit are the principal game and furbearer species. Deer, pheasant, woodchuck, fox squirrel, Canada goose, and other furbearers are common. A great variety of nesting and migrant birds occur on the area. Of particular interest is the spring migration of waterfowl (23 species, including Tundra swans) and shorebirds (28 species). Several species of raptors can be found during migrations and overwintering. Bald eagles have been observed on the wildlife area. Nesting of the state endangered sandhill crane on the purchase unit was confirmed in 1988; this was the first recorded Ohio nesting of this species in more than 60 years. Sandhill nests have been confirmed here several times since. Sandhill cranes are a wetland dependent species. 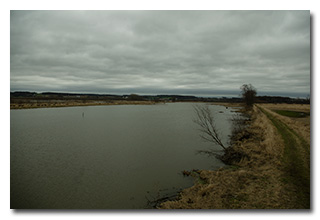 Eric McFadden, WD8RIF, arrived at the Funk Bottoms Wildlife Area observation platform to find the parking area and the observation platform completely empty. Eric chose a place to park and set up his station well away from the main part of the parking area, just in case others were to arrive during the operation, and deployed his 28½' wire antenna on his 31' Jackite telescoping fiberglass mast and drive-on base and, because of the cool temperature (47°) and gusty winds, set up his KX3 inside the car. Eric was on the air at 1506 UTC.

While Eric was setting up, he left the two little dogs, Theo and Mindy, free to wander around. Theo returned to the car as set-up was finished but Mindy spent the entire period of the activation exploring—and getting wet and muddy. 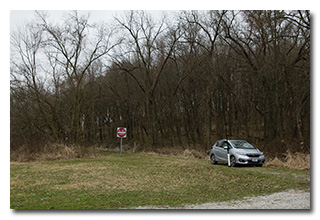 Having expected to find no cell-signal whatsoever at this park, Eric was surprised to find he had excellent cell-signal and was able to spot himself to the POTA Spots website (link) and to look for possible park-to-park (P2P) QSOs.

Eric began operations by looking for possible P2P QSOs but found none at that particular moment.

Eric found his own frequency on 80m and managed to make three QSOs there over a period of about thirteen minutes. Eric was disappointed he wasn't able to complete a QSO on 80m with his friend Mike, K8RAT, who was only 38 straight-line miles away. Eric could hear Mike quite well but Mike couldn't hear him.

Switching to 40m, Eric managed ten QSOs in about fifteen minutes. Eric was pleased that this run included a groundwave-QSO with K8RAT; they were each "119" but the QSO was completed and logged.

Switching to 30m, Eric made four QSOs in about eleven minutes.

Finally, after again looking at POTA Spots for possible P2P QSOs, Eric made a P2P QSO on 20m with NG5E who was activating Lake Somerville State Park (K-3030) in Texas.

Having two more parks to visit before heading south for home, Eric went QRT at 1550 UTC, did some photography, tore down the station, and tried to clean most of the mud off of little Mindy-dog.

In all, Eric made eighteen QSOs including one P2P QSO. All of Eric's QSOs were CW and were made at the 5-watt level.