Egypt Valley Wildlife Area is situated in the southeastern part of Ohio, in Belmont and Guernsey counties.

Located in the unglaciated region of southeastern Ohio in the low hills belt of the steep Allegheny Plateau, the terrain is steep to rolling and is dissected by numerous small streams. Elevations vary from 925 feet to 1,363 feet above sea level. Over the last 70 years, approximately 80 percent of the acreage that comprises Egypt Valley Wildlife Area has been subject to surface mining. The last active mine was completed in 1998. Today all of the forests consist of second and third growth timber. Much of the land that was cleared is now in grassland or brushland and dotted with many small ponds and wetlands. Because of the mining, large expanses of grassland and brushland habitats have been created. 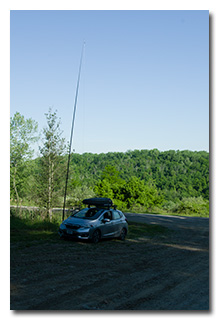 On Saturday, June 5, 2021, one member of the Southeast Ohio Radio Adventure Team performed a successful activation of Egypt Valley Wildlife Area in Ohio as part of the Parks on the Air (POTA; link) program. This was to be the first of four parks to be visited on the second day of a two-day outing, with two parks having been visited the previous day. The parks previously visited in this outing were Shreve Lake Wildlife Area and Beach City Wildlife Area.

After having left his son Miles at the 220th EIS at the Zanesville Air National Guard Base, and while taking a very roundabout route from Zanesville back to Athens, Eric McFadden (WD8RIF) activated Egypt Valley Wildlife Area on a beautiful, sunny morning.

Eric arrived at the C-108 access to Egypt Valley Wildlife Area about 1145 UTC and followed C-108 to find a suitable pull-off for his activation, settling on a wide spot at the intersection of C-108 and T-343. Eric deployed his 28½' wire antenna on his 31' Jackite telescoping fiberglass mast and drive-on mount. In order to have protection from the direct sun, Eric set up his KX3 inside the car and was on the air at 1205 UTC. 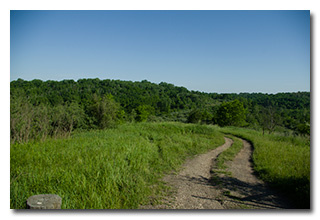 Switching to 40m, Eric made twelve QSOs in fifteen minutes.

In all, Eric made twenty QSOs, including two P2P QSOs, in about thirty minutes. All of Eric's QSOs were CW and were made at the 5-watt level.