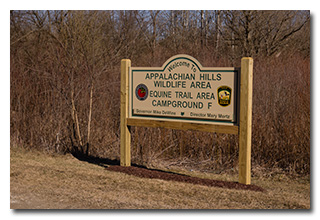 Eric McFadden, WD8RIF, performed the activation of Appalachian Hills State Wildlife Area at the Equine Trailhead on on a cold but sunny day. Eric was accompanied by little dog Theo.

Eric and Theo arrived at the Equine Trailhead on Weaver's Haul Road at about 1900 UTC to find only about 100 yards of Weaver Haul Road to be accessible before a locked gate. Unable to proceed beyond the gate to one of the boat ramp areas further in, Eric park at the locked gate and deployed his 28½' wire antenna on his 31' Jackite telescoping fiberglass mast and drive-on base. Choosing to operate inside the car, deploying his KX3 on the mobile-mount on the car's dashboard. Eric was on the air at 1914 UTC.

Eric was surprised and pleased to find he had sufficient cell-signal to allow him to view the POTA Spots webpage. 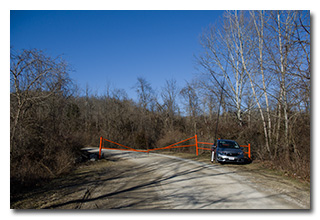 Eric began operations by looking at POTA Spots for possible P2P QSOs and at 1918 UTC he made a P2P QSO on 20m with N4CD who was performing an activation of Eisenhower Birthplace State Historic Site (K-6553) in Texas.

Finding his own frequency on 80m, Eric's first QSO there came at 1920 UTC with his friend K8RAT in Ohio.

Returning to POTA Spots, Eric made a P2P QSO on 40m with KN4RBN who was activating Haw River at Iron Ore Access Belt State Park (K-3843) in North Carolina

Eric chose his own frequency on 40m and began calling "CQ POTA". It was about this time that Eric discovered that the POTA Spots website would not accept spots for the POTA designator K-8112. This unit, one of 341 new units added to the POTA program on January 22, apparently hadn't been added to the POTA Spots database. Eric eventually decided to spot himself as being at Gifford State Forest and send the correct park designation as part of each QSO. This seemed to work, because once the spot was made, Eric had no trouble making QSOs. 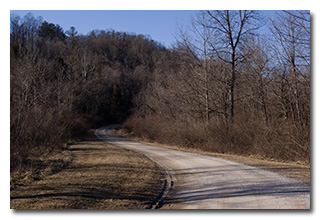 Eric's first QSO on his own 40m frequency came at 1931 UTC with W4FOA in Georgia. QSOs came quickly, with Eric's twenty-ningth QSO in this run coming at 2003 UTC with VE3LDT in Ontario. This run included a P2P QSO at 1942 UTC with K0BWR who was activating Diana Bend State Conservation Area (K-6517) in Missouri and P2P QSO at 2001 UTC with ND9M who was activating Florida Caverns State Park (K-1867) in Florida.

In all, Eric made thirty-four QSOs, including six P2P QSOs. All of Eric's QSOs were CW and were made at the 5-watt level.