Tri Valley Wildlife Area is a 16,200 acre area consisting of mature forests, fields, and brush land. It is located in Muskingum County near Dresden, OH. 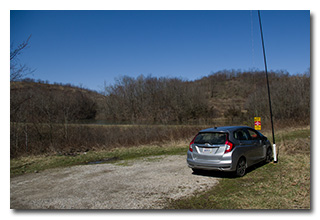 On Saturday, March 20, 2021, two members of the Southeast Ohio Radio Adventure Team performed a successful activation of Tri-Valley Wildlife Area Ohio as part of the Parks on the Air (POTA; link) program.

Eric, Miles, and Theo arrived at the Wildlife Area at about 1530 UTC and, after a bit searching for an operating location, ended up at the "Dog Training Area" on Memory Road. Eric and Miles deployed the 28½' wire antenna on the 31' Jackite telescoping fiberglass mast and drive-on base. Because the outside temperature was still cool, Eric chose to operate inside the car and he installed his KX3 on the car's dashboard. Eric was on the air at 1603 UTC.

With unexpectedly good cell-signal at this location in the wildlife area, Eric was able to use the POTA Spots website to look for possible park-to-park (P2P) QSOs and to self-spot himself.

Eric began operations by looking on POTA Spots for possible P2P QSOs but found no other activations he could work.

Finding a clear frequency on 40m, Eric spotted himself to POTA Spots and began calling "CQ POTA". His first QSO came at 1608 UTC. It was about this time that he realized he had promised his friends he would start operations on 80m. Switching to 80m, Eric made a QSO at 1611 UTC with his friend K8RAT. A few more minutes calling brought no additional QSOs on 80m.

Taking the opportunity again to look for P2P opportunities, Eric made a 40m P2P QSO at 1615 UTC with K0BWR who was activating Urich State Conservation Area (K-8310) in Missouri.

Finally, Eric again checked POTA Spots for P2P possibilities and succeeded in making a P2P QSO on 40m at 1658 UTC with WI2X who was activating Assunpink Wildlife Management Area (K-7504) in New Jersey.

In all, Eric made twenty-three QSOs, with four P2P QSOs, three of which were with K0BWR at one park. All of Eric's QSOs were CW and were made at the 5-watt level.

Miles did not operate but did all the activation photography, helped with set-up and tear-down, and ensured the little Theo-dog remained safe.