Woodbury Wildlife Area is a 19,252-acre state wildlife area located 4 miles west of Coshocton. The property is in Coshocton county. 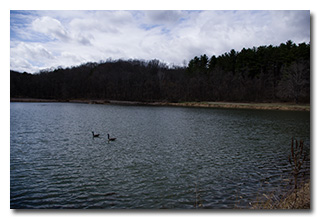 Eric McFadden, WD8RIF, arrived at the Woodbury Overflow Camp to find the camping area and adjacent parking area to be completely empty. Eric chose a place to park on the edge of the pond and deployed his 28½' wire antenna on his 31' Jackite telescoping fiberglass mast and drive-on base and, because of the cool temperature and the possibility of gusty winds, set up his KX3 inside the car. Eric was on the air at 1858 UTC. 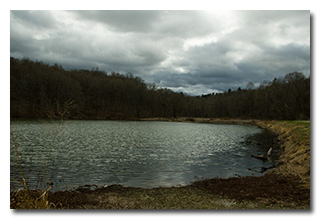 Eric was not surprised to find he had no cell-signal at the site and was, thus, unable to spot himself to the POTA Spots website (link) or to look for possible park-to-park (P2P) QSOs. Against such a contingency, Eric had asked his friends K8RAT and K4SWL to watch the Reverse Beacon Network (RBN) and spot Eric on POTA Spots when he was seen by the RBN.

Eric began operations on 80m and managed to make just three QSOs there over a period of about twelve minutes. The first two QSOs were with big-time POTA hunters, so Eric had some confidence that he had been properly spotted at Woodbury Wildlife Area. His third QSO, with K8RAT, confirmed that Mike had placed a spot for Eric. 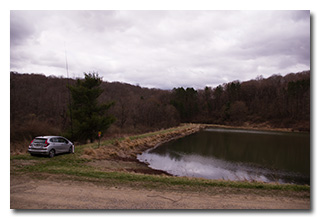 Switching to 40m, Eric managed to make eight QSOs in about eighteen minutes. It was during this run that gunshots were heard elsewhere in the wildlife area and little dog Theo, who is absolutely terrified of gunshots or anything that sounds like gunshots, cowered on the car floor at Eric's feet.

Switching to 30m, Eric made a five QSOs in eleven minutes.

Finally, switching to 20m, Eric made one QSO, with VO1AW in Newfoundland.

In all, Eric made seventeen QSOs in about forty-six minutes. All of Eric's QSOs were CW and were made at the 5-watt level.