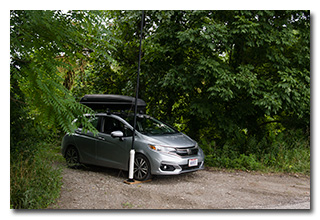 On Friday, July 23, 2021, one member of the Southeast Ohio Radio Adventure Team performed a successful activation of West Blue Rock State Forest in Ohio as part of the Parks on the Air (POTA; link) program.

West Blue Rock State Forest consists of two distinct parcels. Eric McFadden, WD8RIF, performed this activation of the state forest in the northern parcel, at the field-entrance with the barn and oil tank. He was accompanied by his little dog, Theo.

Eric arrived at the field entrance at about 1830 UTC to find the area mostly free of the deep mud he found there during his visit in February, 2021 (link). However, he found the lane to be so overgrown with vegetation, he didn't venture far from the main road. Eric deployed his 28½' wire antenna on his 31' Jackite telescoping fiberglass mast and drive-on base and set up his KX3 inside the car. Eric was on the air at 1838 UTC.

As at his previous visit, Eric had excellent cell-signal at this location and was to self-spot himself on the POTA Spots website and to look for park-to-park (P2P) QSO possibilities.

Eric began operations by finding a frequency to run on 40m and by 1900 UTC he had made ten QSOs.

Switching to 30m, Eric made three QSOs in quick order.

Pausing to check POTA Spots for P2P QSO opportunities, Eric made a P2P QSO at 1914 UTC on 30m with WK2S who was activating Valley Forge National Historical Park (K-0761) in Pennsylvania.

Returning to running a 30m frequency, Eric made two more QSOs on that band by 1917 UTC.

Switching to 20m, Eric had a nice run of four QSOs in less than ten minutes.

In all, Eric made twenty QSOs in forty-eight minutes, including one P2P QSOs. All of Eric's QSOs were CW and were made at the 5-watt level.