From the plaque at the Willow Grove Mine Explosion Memorial: 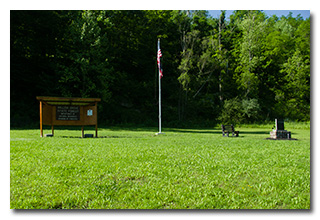 On Saturday, June 5, 2021, one member of the Southeast Ohio Radio Adventure Team performed a successful activation of Willow Grove State Forest in Ohio as part of the Parks on the Air (POTA; link) program. This was to be the second of four parks to be visited on the second day of a two-day outing, with two parks having been visited the previous day. The parks previously visited in this outing were Shreve Lake Wildlife Area, Beach City Wildlife Area, and Egypt Valley Wildlife Area. This was the first CW POTA activation of Willow Grove State Forest.

After having left his son Miles at the 220th EIS at the Zanesville Air National Guard Base, and while taking a very roundabout route from Zanesville back to Athens, Eric McFadden (WD8RIF) activated Willow Grove State Forest at the Willow Grove Mine Explosion Memorial on a beautiful, sunny morning.

Eric arrived at the Willow Grove Mine Explosion Memorial within Willow Grove State Forest at 1315 UTC. Eric had planned to operate in the gravel parking lot across the road from the Memorial but was dismayed to find power lines passing over the very small parking lot. Eric chose, instead, to drive onto the grassy area adjacent to the parking lot and a lovely stream to put distance between himself and the power lines. Eric deployed his 28½' wire antenna on his 31' Jackite telescoping fiberglass mast and drive-on mount. In order to have protection from the direct sun, Eric set up his KX3 inside the car and was on the air at 1337 UTC. 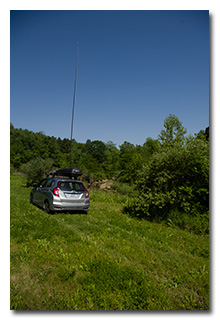 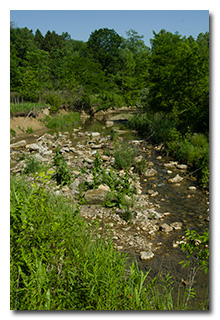 Eric began operations by looking for P2P QSO opportunities and quickly made a P2P QSO on 20m with NG5E who was activating Lake Tawakoni State Park (K-3031) in Texas.

Finding his own frequency on 80m, Eric made four QSOs in nine minutes. This run included QSOs with Eric's friend Mike, K8RAT, and with Eric's father Tom, W8EOG.

Finding his own frequency on 40m, Eric made thirteen QSOs in twenty minutes.

In all, Eric made twenty QSOs, including three P2P QSOs, in about thirty-seven minutes. All of Eric's QSOs were CW and were made at the 5-watt level.