Dedicated December 7, 1979, Jesse Stuart State Nature Preserve is located in Greenup County and 714 acres. The preserve was acquired through a gift-purchase arrangement with the internationally known Kentucky author, Jesse Stuart, and includes the land he made famous in his stories as "W-Hollow". The area is used for passive recreation and environmental education. 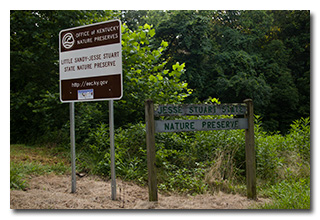 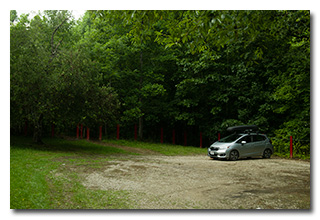 Eric arrived at the Jesse Stuart Nature Preserve's small parking area at about 2245 UTC. After selecting a parking place, Eric quickly deployed his 28½' wire vertical on his Jackite 31' telescoping fiberglass mast and drive-on mount. Because of the lingering possibility of rain and thunderstorms, Eric set up his KX3 inside his car. Eric was on the air at 2256 UTC, leaving him with only a bit more than an hour in which to validate an activation by making ten QSOs. This was to be the first CW POTA activation of Jesse Stuart Nature Preserve.

The intermittent cell-signal at this location allowed Eric to text his friend K8RAT for help in spotting him to the POTA Spots website (link) and for a short while to view POTA Spots to look for possible park-to-park (P2P) QSOs.

Eric began operations by checking POTA Spots for P2P QSO opportunities and at 2302 UTC he made a P2P QSO on 20m with NG5E who was activating Hutchinson Creek Wildlife Management Area (K-4060) in Louisiana.

Eric then made a single QSO on 80m with his friend K8RAT.

Finding a frequency to run on 30m, Eric made five additional QSOs between 2325 UTC and 2335 UTC. This run started with a P2P QSO with special-event station W0W who was activating California National Historic Trail (K-4566) in Missouri.

In all, Eric made eighteen QSOs, including two P2P QSOs. All of Eric's QSOs were CW and were made at the 5-watt level.