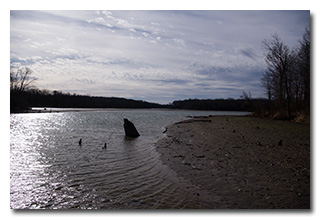 On Wednesday, December 23, 2020, two members of the Southeast Ohio Radio Adventure Team performed a successful activation of Caesar Creek State Wildlife Area in Ohio as part of the Parks on the Air (POTA; link) program. This was the second of four newly-released parks to be visited in this outing and followed the successful activation of Caesar Creek Gorge State Nature Preserve.

This was the first-ever POTA activation of Ceasar Creek State Wildlife Area.

The trio arrived at the Haines Boat Ramp at about 1700 UTC. After finding a spot in the otherwise empty parking lot, Eric and Miles quickly deployed Eric's 28½' wire antenna on his 31' Jackite telescoping fiberglass mast and drive-on base. Eric set up his station in his car and deployed his KX3 on the new mobile-mount on the car's dashboard. Eric was on the air at 1718 UTC. 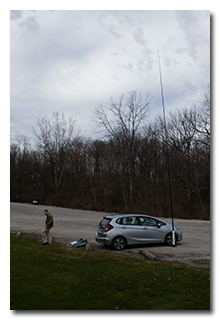 Before starting to make QSOs, Eric re-ran the experiment he had performed at his previous activation. With his KX3 power provided by the car's new direct-to-battery DC bus, the KX3's internal antenna tuner's best match on 80m was 2.7:1. With the KX3 power provided by a ten-cell AA NiMH pack, the same ATU was able to provide a 2:1 match on 80m. Eric's best guess is that when the KX3 is connected to the car's direct-to-battery DC bus, the whole car becomes part of the antenna's ground system and the lower SWR when the car is not part of the ground system is a result of increased ground-losses. For this activation, Eric chose to power his KX3 with the ten-cell NiMH pack so the KX3 would be happier on 80m.

Switching to 80m, Eric's first QSO there came at 1730 UTC with KZ3L in Ohio. This was followed two minutes later by a QSO with VE3LDT in Ontario.

Again checking POTA Spots, Eric made a P2P QSO on 40m at 1734 UTC with AA9OM who was activating Hovey Lake State Fish and Wildlife Area (K-4207) in Indiana. 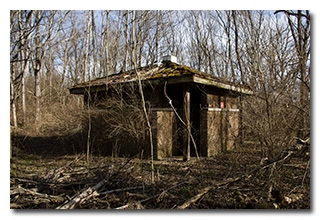 Switching to 40m, Eric's first QSO running a frequency there came at 1738 UTC with his friend K4SWL in western North Carolina. As at the previous activation, QSOs came so quickly Eric wasn't able to keep up with logging. His thirty-fifth QSO in this run on 40m came after only thirty-minutes on the band and was a QSO with W8SUN in Virginia.

Switching to 20m, Eric's first QSO there came at 1815 UTC with KM5GFY in Florida. QSOs came steadily, if not quickly, and Eric's seventh QSO in this run, and the QSO that would have been his last, came at 1823 UTC with K0WRY in Kansas. At 1824 UTC, Eric announced he was "QRT". However, at 1827 UTC, while he was completing his log, Eric was called by N4CD who was activating Spring Creek Forest State Preserve (K-4423) in Texas.

During tear-down, when Miles attempted to start the car in order to drive it off of the drive-on mast-mount, he found the car's battery to be dead. It appears the tiny starter-battery in the 2018 Honda Fit wasn't up to the task of powering an electric-cooler for the hour or so the car wasn't running during the activation. Fortunately, Eric carries jumper-cables and, fortunately, just at that moment, a man who had launched his kayak on the boat ramp drive his pick-up truck to the parking lot to park, and he readily agreed to provide a jump-start. For the following two activations, Eric unplugged the electric cooler after shutting the car off.

In all, Eric made forty-eight QSOs, including four P2P QSOs. All of Eric's QSOs were CW and were made at the 5-watt level. Miles did not operate but helped with navigation, set-up and tear-down, photography, dog-handling, and lunch-rustling.