Purchasing of land for this public hunting and fishing area began in 1953. The area includes the old Sinclair Fur Farm lake and marsh which was improved in 1954 to provide the present 80-acre lake. In addition to hunting and fishing, secondary uses such as gun and archery target shooting, and wildlife observation have become increasingly important. Cropland is managed to provide good distribution of wildlife food and cover in conjunction with the permanent meadow and woody cover. More than 100,000 trees and shrubs have been planted to provide permanent wildlife cover. 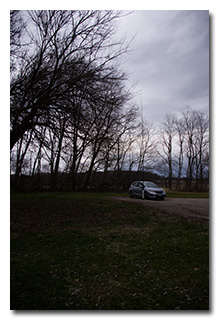 On Wednesday, December 23, 2020, two members of the Southeast Ohio Radio Adventure Team performed a successful activation of Spring Valley State Wildlife Area in Ohio as part of the Parks on the Air (POTA; link) program. This was the third of four newly-released parks to be visited in this outing and followed successful activations of Ceasar Creek Gorge State Nature Preserve and Caesar Creek State Wildlife Area.

The trio arrived at the Spring Valley State Wildlife Area at about 1900 UTC to find the parking area empty except for one pickup truck. Unfortunately, the people associated with that pickup truck were somewhere out of sight shooting rifles and, since, little Theo is terrified of the sound of gunfire, he was uncomfortable while the shooting lasted. (Fortunately, the shooting ended relatively quickly, the man and woman returned to their truck, and drove off.) Eric and Miles deployed Eric's 28½' wire antenna on his 31' Jackite telescoping fiberglass mast and drive-on base. Eric set up his station in his car and deployed his KX3 on the new mobile-mount on the car's dashboard. Eric was on the air at 1916 UTC.

Before finding his own frequency, Eric looked at POTA Spots for possible P2P QSOs and made a P2P QSO on 40m at 1916 UTC with KD4O who was activating Goodale State Park (K-2896) in South Carolina. This was followed at 1919 UTC by a P2P QSO with N1RBD who was activating Chattahoochee-Oconee National Forest (K-4473) in Georgia.

Switching to 40m, Eric's first QSO there came at 1933 UTC with NE1D in Massachusetts. QSOs came quickly, with Eric's thirteenth QSO on 40m coming at 1950 UTC with KB3AAY. This run included a P2P QSO with ND9M who was activating Florida Caverns State Park (K-1867) in Florida.

Switching to 30m, Eric's first QSO there came at 2002 UTC with W2NR in New Hampshire. QSOs came quickly, with Eric's sixth QSO on 30m coming at 2008 UTC with AA5UZ in Louisiana. This run included a P2P QSO with N4CD who was activating Spring Creek Forest State Preserve (K-4423) in Texas.

In all, Eric made twenty-five QSOs, including four P2P QSOs. All of Eric's QSOs were CW and were made at the 5-watt level. Miles did not operate but helped with navigation, set-up and tear-down, photography, and dog-handling.