The preserve's prime feature is the gorge that was formed by great volumes of glacial meltwater cutting down through the bedrock to expose Ordovician limestone and shale rich in fossils. The steep walls rise to 180 feet above the river. More than two miles of Caesar Creek flow through the gorge to the Little Miami State and National Scenic River. The stream and its banks support a wide variety of plant and animal life. Many of the aquatic insects and small fish found here, such as darters, indicate excellent water quality.

The preserve also contains diverse habitat ranging from successional fields to heavily wooded hillsides with beech, maple, hickory and oak. A luxuriant herbaceous flora covers the floodplain, and a variety of prairie species is found on the shallow soil of the cliffs and in old fields. Adjacent to the preserve are 135 acres of Scenic River land, a river access site and the Corwin M. Nixon covered bridge. This forested land maintains bank stability, serves as an example of good floodplain land use and provides recreational access to the Little Miami State & National Scenic River. 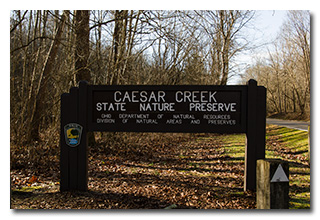 On Wednesday, December 23, 2020, two members of the Southeast Ohio Radio Adventure Team performed a successful activation of Caesar Creek Gorge State Nature Preserve in Ohio as part of the Parks on the Air (POTA; link) program. This was the first of four newly-released parks to be visited in this outing.

The trio arrived at the Caesar Creek Gorge State Nature Preserve at about 1530 UTC. Eric and Miles deployed Eric's 28½' wire antenna on his 31' Jackite telescoping fiberglass mast and drive-on base but had to make field-expedient repairs to the radiator and one one of the counterpoise wire—the stackable banana plugs fell of both of these wires during deployment. Eric set up his station in his car and deployed his KX3 on the new mobile-mount on the car's dashboard. Eric was on the air at 1540 UTC. 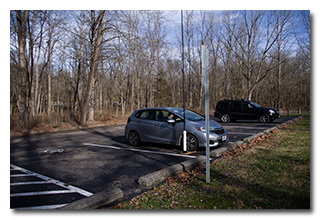 Before starting to make QSOs, Eric performed an experiment. With his KX3 power provided by the car's new direct-to-battery DC bus, the KX3's internal antenna tuner's best match on 80m was 2.7:1. With the KX3 power provided by a ten-cell AA NiMH pack, the same ATU was able to provide a 2:1 match on 80m. Eric's best guess is that when the KX3 is connected to the car's direct-to-battery DC bus, the whole car becomes part of the antenna's ground system and the lower SWR when the car is not part of the ground system is a result of increased ground-losses. For this activation, Eric chose to power his KX3 with the ten-cell NiMH pack so the KX3 would be happier on 80m. 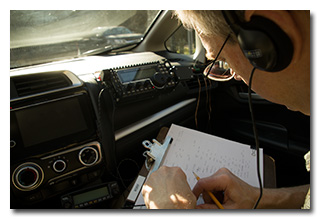 Eric began operations on 80m. His first QSO came at 1544 UTC with his friend K8RAT in Ohio. A QSO with N8EU, also in Ohio, came about two minutes later.

Before finding his own frequency on 40m, Eric looked at POTA Spots for possible P2P QSOs and made a QSO on 20m at 1556 UTC with AI6VZ who was activating Upper Newport Bay Ecological Reserve (K-7378) in California.

Switching to 40m, Eric's first QSO there came at 1557 UTC with KC3KJQ in Maryland. QSOs came so quickly Eric wasn't able to keep up with logging; his twenty-third QSO on 40m came after only seventeen minutes on the band and was a QSO with WB3AVD in Pennsylvania. 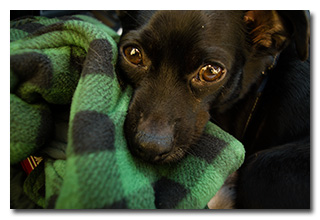 Switching to 20m, Eric's first QSO there was a P2P QSO at 1623 UTC with K9RQ who was activating Chassahowitzka National Wildlife Refuge (K-0235) in Florida. This was followed at 1626 UTC by a P2P QSO with ND9M who was activating Florida Caverns State Park (K-1867) in Florida. QSOs came steadily, with Eric's seventh QSO on 20m coming at 1635 UTC with NL7V in Alaska. This run included a QSO with EI5HJ in Ireland.

In all, Eric made thirty-three QSOs, including three P2P QSOs. All of Eric's QSOs were CW and were made at the 5-watt level. Miles did not operate but helped with navigation, set-up and tear-down, photography, and dog-handling.