The 1,696-acre Woodrum Wildlife Management Area (WMA) ranges across a region of farms and hilly forests of oak, pine, and hickory surrounding Woodrum Lake, an impoundment of the Middle Fork of Pocatalico Creek, a tributary of the Pocatalico River. 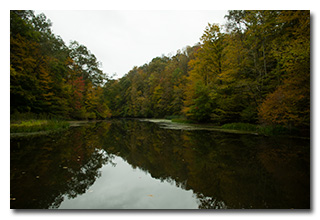 Eric McFadden, WD8RIF, performed the activation of Woodrum Lake Wildlife Management Area at the boat-ramp area with rain from the remnants of Hurricane Delta still falling. Eric was accompanied by his wife Vickie and their small dogs, Theo and Mindy.

Eric, Vickie, and the dogs arrived at the Woodrum Lake Wildlife Management Area boat-ramp area at about 1845 UTC. After photographing Woodrum Lake, Eric deployed his 28½' wire antenna on his 31' Jackite telescoping fiberglass mast and drive-on base. In setting up his antenna, Eric discovered that the banana plug at the feedpoint of 28½' wire antenna had come off, and that his Enhanced KX3 Travel Kit somehow no longer contained the small screwdriver required to reattach the banana plug. Fortunately, Eric was able to make a field-expedient connection by using his unun's five-way binding-post. Because of the continuing rain, Eric set up his KX3 inside the car and was on the air by 1905 UTC. 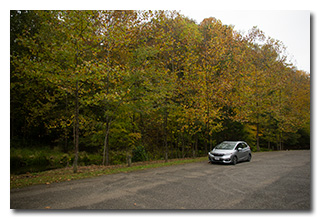 Eric found he had good cell-signal and was able to spot himself to the POTA Spots website.

Eric began operations on 80m but many minutes of calling "CQ" resulted in only one QSO, at 1925 UTC with his good friend K8RAT in Ohio.

In all, Eric made thirteen QSOs. All of Eric's QSOs were CW and were made at the 5-watt level.