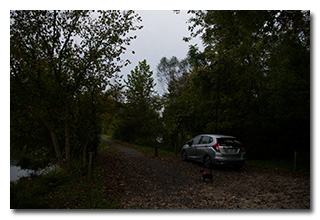 Eric McFadden, WD8RIF, performed the activation of Turkey Run Lake Wildlife Management Area with rain from the remnants of Hurricane Delta still falling. Eric was accompanied by his wife Vickie and their small dogs, Theo and Mindy.

Eric, Vickie, and the dogs arrived at Turkey Run Lake Wildlife Management Area at about 2115 UTC. Because of the fading daylight, while Vickie walked the dogs, Eric quickly deployed his 28½' wire antenna on his 31' Jackite telescoping fiberglass mast and drive-on base. Because of the continuing rain, Eric set up his KX3 inside the car and was on the air by 2137 UTC. 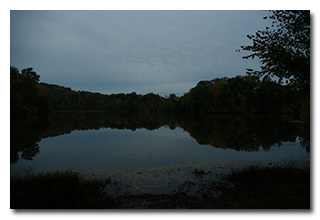 Eric found he had good cell-signal and was able to spot himself to the POTA Spots website.

Eric had hoped to make quick work of making the required ten QSOs for a valid activation but several minutes of calling "CQ" failed to produce any QSOs. Taking the opportunity to hunt for park-to-park (P2P) QSOs, Eric made a P2P QSO on 80m at 2140 UTC with KN3A who was activating Codorus State Park (K-1342) in Pennsylvania while simultaneously participating in the Pennsylvania QSO Party.

Switching to 40m at 2144 UTC, Eric had to go way up in the band to find a frequency clear of contest activity. Eric's first QSO on 40m came at 2148 UTC with NE1D in Massachusetts. QSOs came very slowly, with Eric's second QSO on 40m, a P2P QSO, coming at 2152 UTC with K0ERE who was activating Wilson State Park (K-2355) in Kansas. Eric third and final QSO in this run came at 2157 UTC with WD0ACB in Kansas.

With only four QSOs logged in twenty minutes, and beginning to sense that making the ten required QSOs might be a challenge, Eric changed strategy and began to hunt participants in the Pennsylvania QSO Party. Switching between 80m and 40m, Eric managed to make an additional six QSOs, five of which were PA QSO Party QSOs, and one of which was a QRP ARCI Fall QSO Party QSO. A short return to 80m in the middle of this to call "CQ POTA" resulted in one QSO at 2223 UTC with K4CAE in South Carolina.

In all, Eric made eleven QSOs, which included two P2P QSOs. All of Eric's QSOs were CW and were made at the 5-watt level.