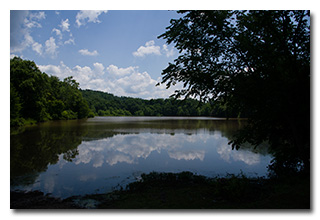 On a beautiful first-day-of-Summer, Eric McFadden, WD8RIF, performed the activation in the WMA's only parking area, overlooking the Turkey Run Lake, while maintaining proper social distancing during the coronavirus (COVID-19) crisis. Eric was accompanied by his wife Vickie and their two small dogs, Theo and Mindy.

Eric, Vickie, and the dogs arrived at Turkey Run Lake WMA about 1615 UTC and were happy to find the WMA's only parking area to be not already full of cars, and to find that there was parking available in a shady spot. Eric deployed his 28½' wire vertical on his Jackite 31' telescoping fiberglass mast which he supported on his drive-on mount. Eric set up his KX3 on his folding camp-chair adjacent to the car and in the shade, and was on the air by 1637 UTC. 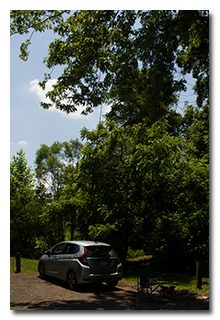 Eric was also pleased to find that he had enough cell-signal to not only send and receive texts but to also self-spot himself on the POTA Spots website (link).

Eric's first QSO on 40m was a park-to-park (P2P) QSO that came at 1643 UTC with KU8T who was performing a POTA activation of Tri-County State and Fish Wildlife Area (K-4229) in Indiana. After finding his own frequency, Eric's second QSO on 40m came at 1650 UTC with K4CAE in South Carolina. QSOs came steadily with Eric's ninth QSO on 40m coming at 1703 UTC with KU4R in Tennessee. Eric missed completing several QSOs (with WB8CPG and W9AV, among others) due to fast and deep QSB on the band. This run of QSOs included a P2P QSO with WB2SMK who was activating Higley Flow State Park (K-2075) in New York. Eric switched to 30m at 1705 UTC.

Eric's first QSO on 30m was a second P2P QSO at 1706 UTC with KU8T who was still at Tri-County State and Fish Wildlife Area in Indiana. After finding his own frequency, Eric's second QSO on 30m came at 1709 UTC with ND2O who was readying his Xeigu G90 transceiver for the upcoming ARRL Field Day. (The G90 sounded good.) Eric's third QSO on 30m came at 1712 UTC with K5KHK in New York. Eric switched to 20m at 1715 UTC. 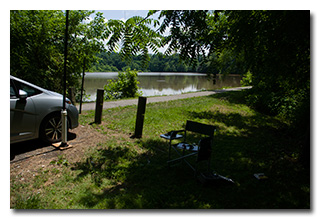 Eric made only one QSO on 20m, at 1720 UTC, with N4DPM in Florida. Because of a scheduled operation at nearby Rollins Lake WMA (K-7063), Eric shut down operations at 1723 UTC, walked Theo while taking photographs, and tore down the station.

In all, Eric made fourteen QSOs. All of Eric's QSOs were CW and were made at the 5-watt level.

This was the Saturday of the West Virginia QSO Party, which celebrates West Virginia's admission into the Union on June 20, 1863, and Eric had anticipated he might need to operate in the WVQP—handing out Jackson County (JAC)—in order to make his ten QSOs, and was pleased that all his QSOs were POTA QSOs.