The 2,848-acre Jug Wildlife Management Area (WMA) ranges across river bottoms and rolling hills through fields and forests of pine and mixed hardwoods. The area is so named for "The Jug" a meander of more than four miles in the course of Middle Island Creek after which the stream nearly meets itself. 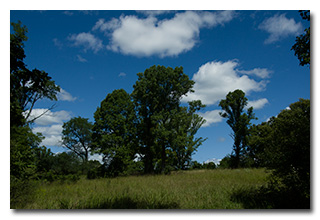 On a beautiful late-Summer day that was perfect for outdoor radio, Eric McFadden, WD8RIF, performed the activation on Klondike Ridge in the southern portion of the WMA. Eric was accompanied by his wife Vickie and their two dogs, Theo and Mindy. 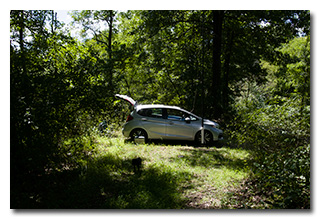 Being thus thwarted, Eric consulted the WVDNR map of the WMA and Google Maps and charted a route to a parking area on Klondike Ridge in the southern portion of The Jug WMA, fully expecting to arrive a possible location much later than his published start-time fort his park. The drive to and along Klondike Ridge was uneventful but no marked parking area was found. Eric did find a pull-off leading to a scenic meadow, arriving there at about 1620 UTC. Eric quickly deployed his 28½' wire vertical on his Jackite 31' telescoping fiberglass mast which he supported on his drive-on mount and set up his station inside the car. Eric was on the air at 1639 UTC, only ten minutes after his announced start-time.

Eric was very suprised to find he had very good cell-signal at the spot and could self-spot himself on the POTA Spots website (link).

Eric began operations on 80m and his first QSO came at 1644 UTC with K8RAT in Ohio. A second QSO on 80m came immediately with AB9CA in Indiana. Eric continued calling "CQ POTA" for several minutes but no further QSOs were made on 80m.

Switching to 40m at 1648 UTC, Eric's first QSO there came at 1452 UTC with NE1D in Massachusetts. QSOs came quickly, with Eric's twelveth QSO on 40m coming at 1705 UTC with KE0TT in Minnesota. This run included a park-to-park (P2P) QSO with K4SWL who was performing an activation of Cold Mountain State Game Land, K-6895, in the mountains of western North Carolina.

In all, Eric made twenty-four QSOs, including five P2P QSOs. All of Eric's QSOs were CW and were made at the 5-watt level.