The 967-acre Sand Hill Wildlife Management Area (WMA) ranges across a forest of oak and hickory in the hills east of the valley of the Ohio River. Remnants of the Volcano oil boom of the late 1800s may be found in the management area. Game traditionally hunted in the management area includes deer, grouse, squirrel, turkey, and rabbit. Logging roads and timber landings provide access throughout. 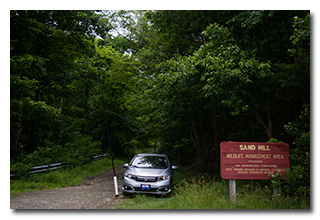 Eric arrived at the Sand Hill Road entrance to the WMA about 1510 UTC but found the gate beyond the WMA sign to be closed and locked—and the road beyond the gate to be impassable by passenger car even if the gate were open. Unsure if he was in the intended spot, Eric cross US50/32 and followed that road up the hill toward what turned out to be the Martian Marietta Burning Springs Mine. Recognizing that this road would have far too much truck traffic on it, Eric drove back to the original spot and set up his station between the WMA sign and the locked gate, confident he was within the WMA and not in danger of being hit by a large dumptruck. Eric deployed his 28½' wire vertical on his Jackite 31' telescoping fiberglass mast which he supported on his drive-on mount and, because it was a rainy day, he set up his KX3 inside his car. Eric was on the air by 1539 UTC.

Eric was pleased to find that he had enough cell-signal to not only send and receive texts but to also self-spot himself on the POTA Spots website (link).

Eric began operations on 80m and his first QSO there came at 1544 UTC with his good friend K8RAT. When no further answers to his calls of CQ were answered, Eric switched to 40m at 1547 UTC.

Before switching to 20m, Eric checked the POTA Spots and was able to make a park-to-park (P2P) QSO on 40m at 1624 UTC with W9ILF who was performing an activation of Deer Creek State Fish and Wildlife Area (K-4194) in Indiana.

Eric's first QSO on 20m came at 1629 UTC with WA9VFD in North Carolina. QSOs on 20m came more quickly than had lately been the case, with Eric's eleventh QSO on 20m coming at 1644 UTC with KO4SB. In this run of QSOs came a surprising pair of 599/599 QSOs with stations located in Pennsylvania.

In all, Eric made thirty-five QSOs. All of Eric's QSOs were CW and were made at the 5-watt level.

Upon returning home to ready-access to Google Maps with satellite view, Eric confirmed that he had, in fact, operated exactly where he had intended to, at the parking area identified on the official WV map of Sand Hill WMA. Why the parking area was little more than a single-lane unmaintained road, why the gate was closed and locked, and why the road beyond the gate is unsuitable for driving on are questions that remain to be answered.