The 80-acre Rollins Lake Wildlife Management Area (WMA) ranges across a lake and an adjacent meadow in the valley of Mill Creek. Rollins Lake is equipped with a boat launch ramp. The lake accommodates fishing for bluegill, crappie, largemouth bass, channel catfish, and trout (in winter). 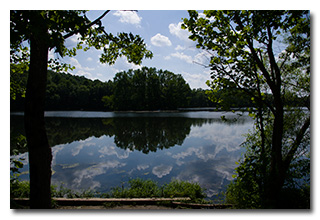 On a beautiful first-day-of-Summer, Eric McFadden, WD8RIF, performed the activation from a spot overlooking Rollins Lake, while maintaining proper social distancing during the coronavirus (COVID-19) crisis. Eric was accompanied by his wife Vickie and their two small dogs, Theo and Mindy.

Eric, Vickie, and the dogs arrived at Rollins Lake WMA about 1830 UTC and checked out all the parking and fishing areas, noting that nearly all of the parking and fishing areas already had many occupants, before choosing a shady spot in the unoccupied third parking area, counting clockwise from the WMA entrance on CR87. Eric deployed his 28½' wire vertical on his Jackite 31' telescoping fiberglass mast which he supported on his drive-on mount. Eric set up his KX3 on his folding camp-chair in front of the car and in the shade, and was on the air by 1843 UTC. 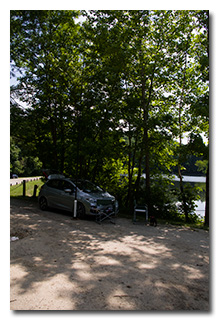 Eric was pleased to find that he had enough cell-signal to not only send and receive texts but to also self-spot himself on the POTA Spots website (link).

Eric's first QSO on 40m came at 1853 UTC with N4EX in North Carolina. Eric's second QSO on 40m came at 1854 UTC with NE1D in Massachusetts. Eric's third QSO on 40m came at 1855 UTC with K0PG in Illinois. At this point, the noise floor on 40m—which had already been higher than Eric usually finds at POTA units—jumped dramatically to S4 or S5 and further QSOs on 40m proved to be impossible to make. Forced by the noise-level, Eric switched to 30m at 1859 UTC, hoping that Hunters who were trying to work him on 40m might also have a path on 30m.

Eric made only one QSO on 20m, at 1828 UTC, with N1RBD in Georgia. Eric shut down operations at 1933 UTC, walked Theo while making photographs, and tore down the station.

In all, Eric made twenty-three QSOs. All of Eric's QSOs were CW and were made at the 5-watt level.

This was the Saturday of the West Virginia QSO Party, which celebrates West Virginia's admission into the Union on June 20, 1863, and Eric had anticipated he might need to operate in the WVQP—handing out Jackson County (JAC)—in order to make his ten QSOs, and was pleased that all his QSOs were POTA QSOs.

While the WMA itself was pretty—and, apparently, quite popular with the locals—the RF noise-level Eric encountered here is the highest he remembers encountering in any of his 183 NPOTA activations or 107 POTA activations. The noise, while loudest on 40m, was present on all bands Eric tried and had a clearly mechanical nature. Whether the noise was being generated within the WMA or somewhere outside the WMA but relatively close wasn't determined. Eric was pleased that he was able to fall back upon 30m when 40m became unworkable. Indeed, Eric was startled at the number of QSOs he made, and the rate at which he made them, on 30m. He couldn't remember any previous activation in which he made so many QSOs, at such a pace, on 30m.