The 10,000-acre Hughes Wildlife Management Area (WMA) ranges across river bottoms to steep slopes forested in oak oak and hickory and a patchwork of young, managed stands of pine and hardwoods. Game traditionally hunted in the management area include deer, grouse, squirrel, rabbit, and turkey. The Hughes River and Little Kanawha River accommodate fishing for panfish, smallmouth bass, muskellunge, and channel catfish. The wildlife management area is named in honor of pioneer Jesse Hughes, who explored the Hughes river. 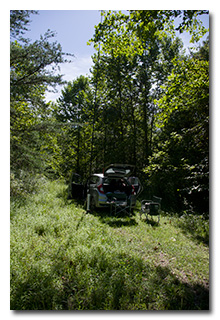 On a splendid day for outdoor radio, Eric McFadden, WD8RIF, performed the activation at a trail-head near the South Fork of the Hughes River. Eric was accompanied by his wife Vickie and their two dogs, Theo and Mindy.

Prior to his activation, Eric had mapped out three possible operating locations, all of which were close together and all of which we located relatively close to Ritchie Mines Wildlife Managment Area, K-7062, his second destination of the day. Two of Eric's chosen locations were located off of Tarkiln Road, accessed by WV 47 (maps: 1 | 2). The third was a nearby public fishing access point on WV 47 (map).

Eric, Vickie, and the dogs arrived at the intersection of WV 47 and Tarkiln Road at 1430 UTC to find a pair of pickup trucks with flatbed trailers parked there. They also found that the road that led to Eric's preferred location, the the cul de sac at the end of an un-named road, was impassable by Honda Fit. Eric chose to stay at the current location, which had been his second choice, and after squeezing the Fit past the trucks to get to a flat area a bit farther away from Tarkiln Road, set up his station. In order to be able to sit in the shade provided by the open hatch of the car, Eric deployed his 28½' wire vertical on his Jackite 31' telescoping fiberglass mast which he supported on a drive-on base at the left-rear corner of the car. Setting up his KX3 on his folding camp-chair, Eric was on the air at 1450 UTC.

Eric was not all surprised to find he had no cell signal at this location. The lack of cell signal meant he couldn't self-spot himself on the POTA Spots website (link) or even send text updates to his friend K8RAT for his spotting assistance. Having anticipated this, Eric had announced his activation on the POTA website and was hopeful that the POTA algorithm would successfully auto-spot him based on received Reverse Beacon (RBN) spots. (Eric later learned that POTA did not initially spot him based on received RBN spots. Upon seeing Eric spotted on the RBN, but also seeing that POTA wasn't generating spots for Eric, K8RAT had to manually spot Eric to the POTA Spots website a first time, whereupon POTA Spots did thereafter correctly spot Eric as he changed frequencies.) 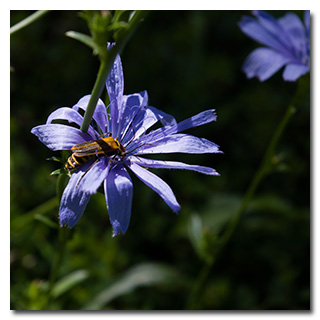 For this activation, Eric was trying two new items which were ultimately be be part of Eric's new K1 Travel Kit. The first item was a newly-constructed speaker-wire 28½' wire vertical antenna with three counterpoise wires, and the test was merely to verify that no gross errors had been made in the construction of this simple and well-proven design. The second item was a Talentcell 12vdc 3,000mAh LiPO battery pack (link), and the test was to gauge how well the battery would power a QRP transceiver over two CW activations.

Eric began operations on 80m and his only QSO there came at 1450 UTC with his friend Mike, K8RAT, in north-central Ohio.

In all, Eric made twenty-six QSOs, which included two P2P QSOs. All of Eric's QSOs were CW and were made at the 5-watt level.

The new antenna under test for this activation acquitted itself well. The KX3's internal ATU had no trouble matching the antenna on 80, 40, 30, and 20m, and QSOs were made on all four bands. This test did not prove that the ATU inside Eric's K1 will be able to match the antenna on 40, 30, 20, and 15m, but it did at least demonstrate that no gross errors were made during the antenna's construction.

The Talentcell LiPO battery under test also acquitted itself well during this activation. Final results of this test can be found in the report on the second activation of the day, the activation of Ritchie Mines Wildlife Management Area, K-7062 (link). 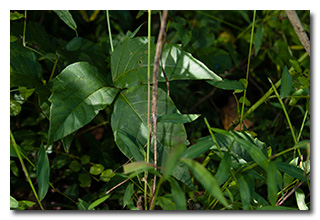 While Eric has been performing the activation, the two small dogs had been allowed to roam. It was only after they had been roaming for a while that it was discovered that not only was poison ivy growing at the edge of trees, it was also growing freely in the open area adjacent to where the car has been parked, the area through which the dogs had been roaming. Fortunately, Vickie had thought to bring a gallon-jug of soapy water and both dogs were given baths before they were allowed back into the car or onto Eric's or Vickie's laps.

This operating location, while not Eric's first choice based on map-reading, had proven itself to be OK except for two things. The first thing was the aforementioned poison ivy. The second was the loud noise of traffic on nearby WV 47 and the sound of ATVs using Tarkiln Road to access the WMA. Otherwise, the area was very quiet, RF-wise. 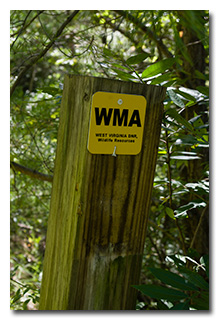 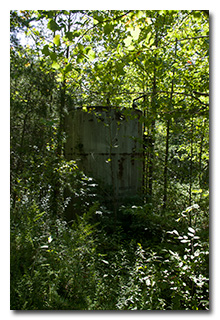