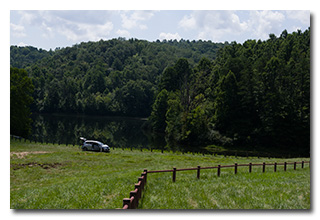 On a beautiful summer day, Eric McFadden, WD8RIF, performed the activation overlooking the Right Fork of Frozencamp Creek while maintaining proper social distancing during the coronavirus (COVID-19) crisis. Eric was accompanied by his daughter Kate and Kate's dog, Bo.

Eric, Kate, and Bo arrived at Frozen Camp WMA about 1435 UTC and, after checking out the boat-ramp and parking area, Eric chose to set up at the northern end of the Right Fork of Frozencamp Creek, overlooking the lake. The only other people in sight were a pair of anglers in a boat on the lake. Eric deployed his 28½' wire vertical on his Jackite 31' telescoping fiberglass mast which he supported on his drive-on mount. To take advantage of the shade offered by the car's roof, Eric set up his KX3 inside the car. As Eric was setting up, Kate walked Bo around the area and found several large puddles full of tadpoles. Eric was on the air at 1458 UTC. 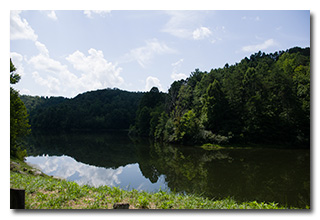 Eric's first QSO on 30m came at 1553 UTC with W0YES in Minnesota. QSOs came steadily, with Eric's sixth QSO on 30m, a third P2P QSO with K0BWR, who was still at K-6523, coming at 1558 UTC. Because of the need to get to the next park, Eric shut down operations at 1600 UTC, made some photos, and tore down his station. Before leaving for the next park, Eric and Kate picked up litter left by previous visitors.

In all, Eric made twenty QSOs, which included three P2P QSOs. All of Eric's QSOs were CW and were made at the 5-watt level.