Conaway Run Lake, at 30 acres, is equipped with a small boat ramp and accommodates fishing for trout, bluegill, largemouth bass, and channel catfish. The lake is stocked with trout from February until May. Ten primitive campsites with vault toilets and well water and a 100-yard shooting range have been developed. 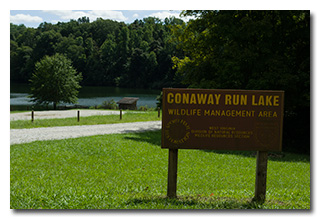 On a beautiful late-Summer day that was perfect for outdoor radio, Eric McFadden, WD8RIF, performed the activation at the boat ramp area on Conaway Run Lake. Eric was accompanied by his wife Vickie and their two dogs, Theo and Mindy.

Eric, Vickie, and the dogs arrived at Conaway Run Lake at about 1820 UTC. After a quick exploration and a walk with the dogs, Eric deployed his 28½' wire vertical on his MFJ-1910 33' telescoping fiberglass mast which strapped to an old hand-operated water pump and set up his KX3 on his folding camp-chair in the shade of nearby trees. Eric was on the air at 1836 UTC, about ten minutes prior to his announced start-time. 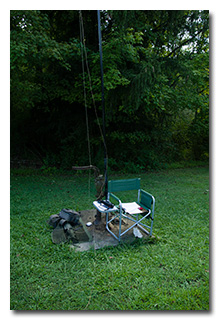 Eric was disappointed to find he had no cell-signal at the spot and couldn't self-spot himself on the POTA Spots website (link) or even text updates to his friend K8RAT for his spotting assistance. Eric had announced his activation on the POTA website and was hopeful that the POTA algorithm would successfully auto-spot him based on received Reverse Beacon spots.

Eric began operations on 80m and his only QSO came at 1845 UTC with KI8EB in Kentucky.

In all, Eric made nineteen QSOs. All of Eric's QSOs were CW and were made at the 5-watt level. 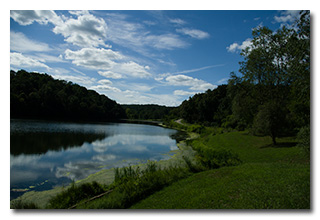