The 143-acre Buffalo Run Wildlife Management Area (WMA) ranges from bottoms along Middle Island Creek to moderate upland slopes with a patchwork of old fields and forests of oak and hickory. 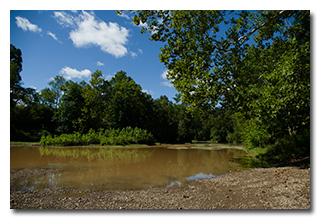 On a beautiful late-Summer day that was perfect for outdoor radio, Eric McFadden, WD8RIF, performed the activation at the WMA's Middle Island Creek Fishing and Boating Access Site. Eric was accompanied by his wife Vickie and their two dogs, Theo and Mindy.

Eric, Vickie, and the dogs arrived at the Middle Island Creek Fishing and Boating Access Site at about 1400 UTC and, after checking out the area and letting the dogs explore, Eric deployed his 28½' wire vertical on his Jackite 31' telescoping fiberglass mast which he supported on his drive-on mount and set up his station inside the car. Eric was on the air at 1417 UTC. 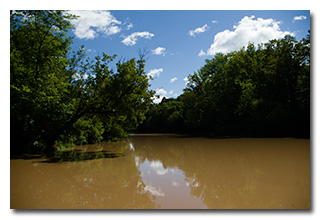 Eric was not suprised but was still disappointed to find he no cell-signal at the spot and couldn't self-spot himself on the POTA Spots website (link) or even text updates to his friend K8RAT for his spotting assistance. Eric had announced his activation on the POTA website and was hopeful that the POTA algorithm would successfully auto-spot him based on received Reverse Beacon spots.

Switching to 40m at 1435 UTC, Eric was somewhat pleased to find the power line noise to less strong than it has been on 80m. Eric's first QSO on 40m came at 1438 UTC with his good friend K4SWL in the mountains of western North Carolina. QSOs came quickly, with Eric's fifteenth QSO on 40m coming at 1455 UTC with N9XG.

Switching to 30m at 1457 UTC, Eric found no significant power line noise and his first QSO on the band came at 1458 UTC with WD0ACB in Kansas. QSOs came quickly, with Eric's sixth QSO on 30m coming at 1506 UTC with KO4SB.

Switching to 20m at 1509 UTC, Eric found very loud power line noise. He called "CQ POTA" for several minutes but no QSOs resulted and Eric shut down the station at 1513 UTC.

In all, Eric made twenty-seven QSOs. All of Eric's QSOs were CW and were made at the 5-watt level.