The 1,470-acre Mill Creek Wildlife Management Area (WMA) ranges across a forest of oak, pine, and hickory on and near the left fork of Mill Creek, a tributary of the lower Mud River. 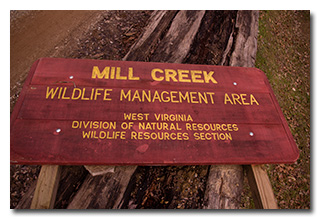 Eric McFadden, WD8RIF, and Miles McFadden, KD8KNC, performed the activation of Mill Creek Wildlife Management Area on the only road passing through the park. Eric and Miles were accompanied by the two small dogs, Mindy and Theo.

Prior to the actual visit, Eric had studied the WVDNR map, the Google Map, and Google Satellite imagery, and was able to find only one possible location for an activation, a 1,700-foot stretch of Mill Creek Road which passes through the northern-most section of the park. No other parking areas, trailheads, or hunter-access points were found. The Google satellite imagery showed Mill Creek Road to be entirely covered with trees, so Eric was unsure whether he would be able to find a pull-off or if the tree-cover would prevent him from deploying his antenna. 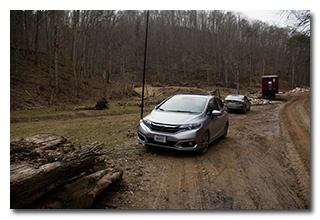 The quartet arrived at Mill Creek Road within the wildlife management area at about 1715 UTC to find that a nice wide area did exist and that tree-cover wouldn't complicate the deployment of the antenna. However, what hadn't been expected was that this wide area was full of construction equipment, including a larger digger moving big rocks and boulders around, and lots of mud. After driving the entire 1,700' stretch of road within the WMA, Eric decided that the only place to set up for the activation was at the construction area. Returning to the wide spot, Eric was able to confirm with one of the construction workers that he was, in fact, within Mill Creek Wildlife Management Area, and he was given permission to park at the far end of the construction area for his activation. After parking well off the road and well away from the construction, Eric and Miles deployed the 28½' wire antenna on the 31' Jackite telescoping fiberglass mast and drive-on base. Deploying his KX3 on the mobile-mount on the car's dashboard, Eric was on the air at 1739 UTC. (It was Miles who later found and photographed the WMA sign atop a pile of detritus.) 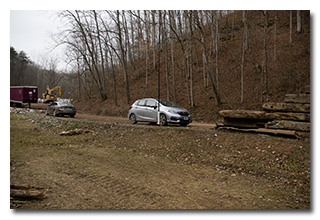 As he had expected, Eric found he had absolutely no cell-signal and was unable to self-spot himself on the POTA Spots website or to even send texts to his friends for Spotting-support. Against this possibility, Eric had asked K8RAT and K4SWL to watch the Reverse Beacon Network and verify that POTA Spots properly spotted him correctly.

Eric began operations on 80m and his first QSO came at 1742 UTC, with the aforementioned K4SWL in North Carolina. A second and final QSO on 80m came at 1745 UTC with W4SK in Tennessee.

Switching to 40m, Eric's first QSO came at 1752 UTC with NR1Z in South Carolina. QSOs came very quickly, with Eric's forty-third QSO on 40m coming at 1836 UTC with VA3ET in Ontario. This run included a QSO with the aforementioned K8RAT in Ohio as well as a second QSO with K4SWL.

In all, Eric made forty-five QSOs in just about an hour. All of Eric's QSOs were CW and were made at the 5-watt level. 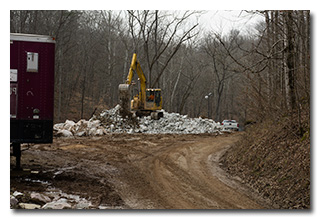