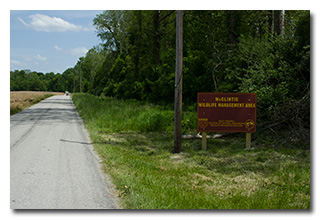 On Friday, May 21, 2021, one member of the Southeast Ohio Radio Adventure Team performed a successful activation of McClintic Wildlife Management Area in West Virginia as part of the Parks on the Air (POTA; link) program. This was the second CW POTA activation of McClintic Wildlife Management Area, the first one also having been performed by Eric.

Eric arrived at McClintic WMA about 1845 UTC to find that the pretty location he had previously used was already occupied by a van but he was able to find an empty spot nearby that was almost as nice and perhaps provided more shade. Eric deployed his 28½' wire vertical on his Jackite 31' fiberglass mast and drive-on mount, set up his KX3 inside the car, and was on the air at 1900 UTC.

Unexpectedly, Eric discovered he had sufficient cell-signal to allow him to self-spot and check for park-to-park (P2P) opportunities using the POTA Spots website (link). At his previous visit, Eric had had only enough cell signal to send and receive SMS text messages. 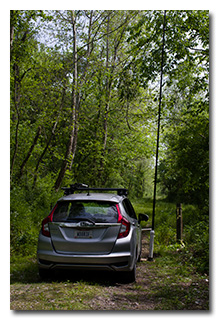 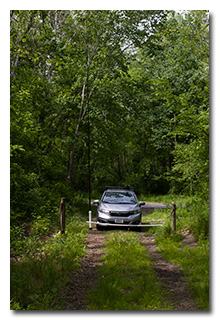 Finding his own frequency on 40m, Eric made three QSOs in quick succession. This short run included a P2P QSO with VE3FI who was activating Frontenac Arch Biosphere Reserve (VE-0023) in Ontario, Canada.

Pausing for a quick check of P2P opportunities, Eric made a P2P QSO on 30m with KF9VV who was activating Council Grounds State Park (K-1447) in Wisconsin.

Returning to his 40m frequency, Eric made another ten QSOs in about fifteen minutes. This run included a P2P QSO with AE4ZR who was activating First Landing State Park (K-1299) in Virginia.

In all, Eric made sixteen QSOs with five P2P QSOs. All of Eric's QSOs were CW and were made at the 5-watt level.