Before the activation, Eric, Vickie, Miles, Kate, and the dogs had a fun lunch at Hillbilly Hotdogs (link), which is located on WV Route 2, just nine miles south of Green Bottom WMA. 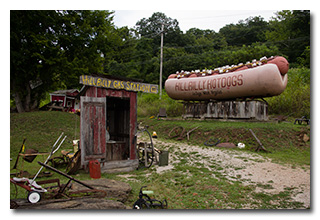 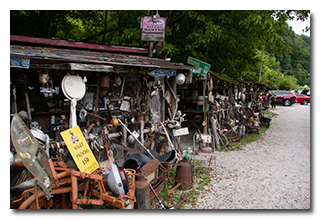 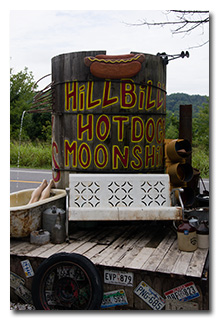 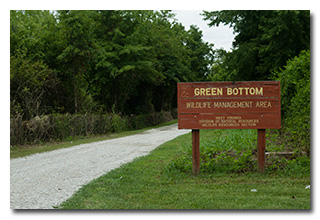 Following lunch at Hillbilly Hotdogs, the four humans and two dogs arrived at the end of the the Wetlands Boat Ramp Road in Green Bottom Wildlife Management Area at about 1715 UTC, fifteen minutes into the four-hour-long Skeeter Hunt. While Vickie and Kate explored and walked the dogs, Eric and Miles deployed the 28½' wire antenna on Eric's 31' Jackite telescoping fiberglass mast and drive-on base. Because of the nice weather, Eric chose to operate outside, and he set up his KX3 on his folding camp-chair. Eric was on the air at 1730 UTC.

As he had expected, Eric found he had excellent cell-signal and would be able to self-spot himself on the POTA Spots website and to look for park-to-park (P2P) QSO opportunities when the time was right. 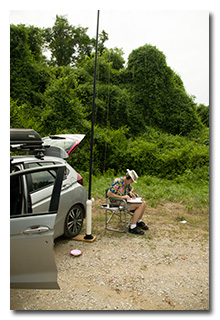 Eric's plan was to try to make at least his initial ten QSOs by participating strictly in the Skeeter Hunt before spotting himself to POTA Spots or looking for P2P QSOs.

Finding his own frequency on 40m, Eric began calling "CQ BZZ" and between 1758 UTC and 1749 UTC he made five Skeeter Hunt QSOs with W3PD in Pennsylvania, N4HAY in North Carolina, KB3JC in Pennsylvania, K4KO in Tennessee, and AA5XA in Arkansas.

Switching to 20m, Eric looked for stations calling CQ in Skeeter Hunt, and at 1757 UTC he made a Skeeter Hunt QSO with WB4OMM in Florida.

Returning to 40m Eric made a Skeeter Hunt QSO at 1803 UTC with AD4S in Georgia.

With eleven Skeeter Hunt QSOs in the log, Eric thought it was time to begin working POTA stations. Eric began calling "CQ POTA" on 40m and between 1811 UTC and 1818 UTC he made five POTA QSOs with AB9BZ in Illinois, WA4RCW in Tennessee, K9IS in Wisconsin, VE3DQN in Ontario, and WA9VFD in North Carolina. 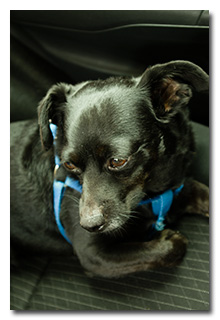 Pausing to look for P2P QSO opportunities, Eric made a P2P at 1823 UTC on 30m with WB2SMK who was activating Grafton Lakes State Park (K-2065) in New York. Because this QSO was made on a WARC band, it didn't count toward Eric's Skeeter Hunt score but did count, of course, for POTA.

In all, Eric made twenty-five QSOs with one P2P QSO. All of Eric's QSOs were CW and were made at the 5-watt level.

In Skeeter Hunt, Eric made ten QSOs with Skeeters, three QSOs with non-Skeeter QRP stations, and eleven QSOs with QRO stations. Eric had a Station Class multiplier of four for "portable, kit-built", and an SPC multiplier of fourteen. Eric was able to earn the 100 point bonus for being able to spell "Skeeter" with letters found in callsigns of the stations he worked using W4MPS, KB3JC, N2EI, VE3DQN, K8RAT, KE8PX, and WA4RCW.

Miles did not make any QSOs but helped with station set-up and tear-down and did most of the expedition photography.

Before hitting the road for home, Eric asked Miles and Kate to clean up some of the trash that had been left behind by previous visitors.