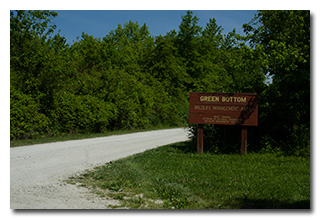 Eric McFadden, WD8RIF, performed the activation of Green Bottom Wildlife Management Area on a rapidly heating up, brilliantly sunny day at the end of of the Wetlands Boat Ramp Road. Eric was accompanied by the two small dogs, Mindy and Theo.

The trio arrived at the WMA at about 1500 UTC. After parking under the shade of large trees and walking the two little dogs, Eric deployed his 28½' wire antenna on his 31' Jackite telescoping fiberglass mast and drive-on base. Eric chose to set up his station in his car, deploying his KX3 on the mobile-mount on the car's dashboard, and performed the activation with the car windows and doors open. Eric was on the air at 1517 UTC. 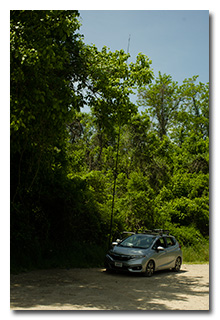 Finding his own frequency on 40m, Eric made eleven QSOs in about twenty minutes. This run included a QSO with Eric's good friend K8RAT in central Ohio and signal strengths were 599 in both directions, and indication that the short-paths were particularly good.

Pausing to check again for P2P opportunities, Eric made a P2P QSO on 30m with N3RN who was activating Ricketts Glen State Park (K-1413) in Pennsylvania.

Finding his own frequency on 30m, Eric made three QSOs in about eight minutes. This run included a second QSO with K8RAT, again with signal strengths of 599 in both directions.

Eric again paused to look for P2P opportunitues and made a P2P on 40m with AB9CA who was activating Paynetown on Monroe Lake State Recreation Area (K-4171) in Indiana. This was followed by a P2P QSO on 20m with KU8T who was activating Ouabache State Park (K-2263) in Indiana—West Virginia to Indiana on 20m, 599 both ways? Amazing!

Finding his own frequency on 20m, Eric made four QSOs in ten minutes. This run included a QSO with WC0Y in Indiana with reports of 599 in both directions and a QSO with F6HKA in France.

In all, Eric made twenty-three QSOs with five P2P QSOs in just about an hour. All of Eric's QSOs were CW and were made at the 5-watt level.

Before hitting the road for the next park, Eric paused for his picnic lunch and then cleaned up some of the trash that had been left behind by previous visitors.