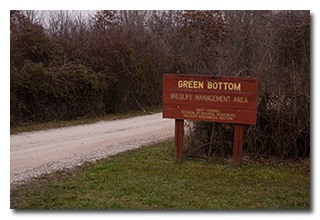 Eric McFadden, WD8RIF, and Miles McFadden, KD8KNC, performed the activation of Green Bottom Wildlife Management Area at the end of of the Wetlands Boat Ramp Road. Eric and Miles were accompanied by the two small dogs, Mindy and Theo.

The quartet arrived at the WMA at about 1515 UTC. After walking the two little dogs, Eric and Miles deployed the 28½' wire antenna on the 31' Jackite telescoping fiberglass mast and drive-on base. Because of the cold temperature, Eric to chose to set up his station in his car, deploying his KX3 on the mobile-mount on the car's dashboard. Eric was on the air at 1531 UTC. 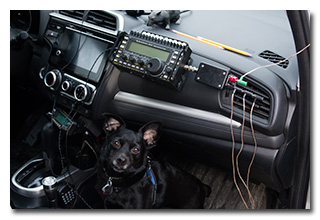 Eric began operations on 80m and his first QSO came almost immediately, at 1533 UTC, with his good friend K8RAT in Ohio. QSOs came quickly, with Eric's eleventh QSO coming at 1548 UTC with W5VS in Virginia.

Switching to 40m, Eric's first QSO came at 1551 UTC with Eric's friend K4SWL in North Carolina. QSOs came very quickly, with Eric's thirty-fifth QSO on 40m coming at 1624 UTC with KB3FTE in Pennsylvania. This run included a P2P QSO at 1621 UTC with ND9M who was performing an activation of Florida Caverns State Park, K-1867, in Florida. 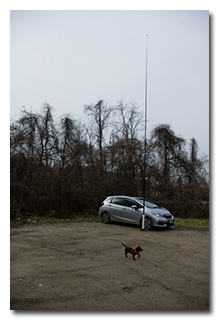 Before tearing down, Eric again checked POTA Spots and made two more P2P QSOs on 30m. These came at 1639 UTC and 1640 UTC, with WI2X and NT2A, who were performing activations of North Mt. Loretto State Forest, K-5428, in New York.

In all, Eric made fifty-three QSOs in just about sixty-seven minutes. All of Eric's QSOs were CW and were made at the 5-watt level.