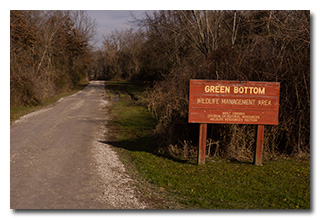 Eric McFadden, WD8RIF, performed the activation of Green Bottom Wildlife Management Area on an unseasonably warm day at the end of of the Wetlands Boat Ramp Road. Eric was accompanied by the two small dogs, Mindy and Theo.

The trio arrived at the WMA at about 1530 UTC. After walking the two little dogs, Eric deployed his 28½' wire antenna on his 31' Jackite telescoping fiberglass mast and drive-on base. Despite the day being unseasonably warm, it was still cool enough for Eric to chose to set up his station in his car, deploying his KX3 on the mobile-mount on the car's dashboard. Eric was on the air at 1546 UTC. 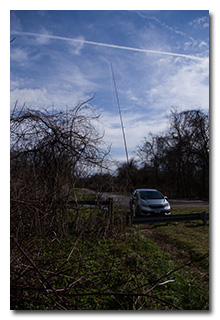 Eric found he had excellent cell-signal and was able to self-spot himself on the POTA Spots website and to look for park-to-park (P2P) QSO opportunities.

Eric began operations on 80m and his first QSO came immediately, at 1546 UTC, with his good friend K8RAT in Ohio. QSOs came steadily, with Eric's ninth QSO coming at 1557 UTC with W5GDW in North Carolina.

Switching to 40m, Eric's first QSO came at 1601 UTC and was a short ragchew with WA3NZR, JJ, in Lancaster, Pennsylvania. QSOs came very quickly, with Eric's fifty-sixth QSO on 40m coming at 1650 UTC with KC7ND in Tennessee.

The pace of the QSOs on 40m was such that Eric was unable to look at POTA Spots for possible P2P QSOs and by the time the rush of QSOs was over it was time to tear down the station and proceed to the next park.

In all, Eric made sixty-five QSOs in just about fifty-six minutes. All of Eric's QSOs were CW and were made at the 5-watt level.

Eric found that location in Green Bottom Wildlife Management Area to much quieter, both acoustically and RF-wise, than at the location where her had performed his earlier activation of the park. 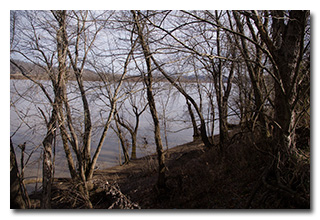