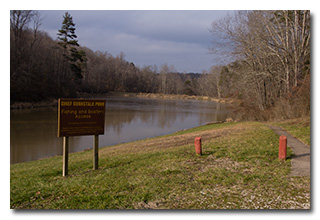 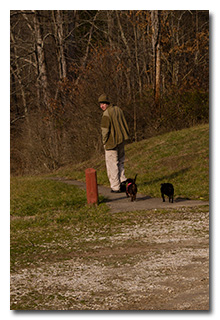 The quartet arrived at Chief Cornstalk Wildlife Management Area at about 1930 UTC, after having to detour around a road that had been suggested by Google Maps but turned out to be impassable by Honda Fit. After arriving at the pull-off Eric had used at his previous activation, Eric decided to do a bit more exploration in hopes of finding a better place to set up and operate. Not at all far beyond this pull-off, Eric found the "Chief Cornstalk Pond", the park's fishing and boating access point, which turned out to be a far superior place to perform an activation. After finding a place to park in the otherwise empty parking area, Eric and Miles deployed the 28½' wire antenna on the 31' Jackite telescoping fiberglass mast and drive-on base. Deploying his KX3 on the mobile-mount on the car's dashboard, Eric was on the air at 1957 UTC.

Having had no cell-signal at all at his previous activation of this park, Eric was pleased to find that this time he had just enough cell-signal to text his friends K8RAT and K4SWL for spotting-support. 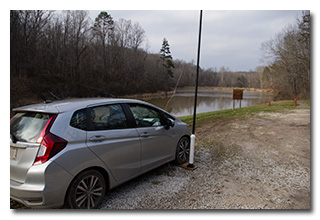 Switching to 40m, Eric's first QSO came at 2007 UTC with KG8P in Michigan. QSOs came very quickly, with Eric's thirty-second QSO on 40m coming at 2032 UTC with VA3SN in Ontario. This run included a second QSO with K4SWL.

In all, Eric made thirty-nine QSOs in just about thirty-five minutes. All of Eric's QSOs were CW and were made at the 5-watt level.

When it came time to leave the park, Google Maps again directed Eric onto a road impassable by Honda Fit. This road, "Middle 9 Mile Road", was later identified as the other end of the same impassable road that Google Maps had directed them onto earlier. 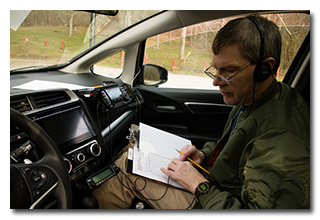