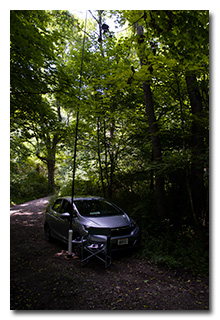 On Tuesday, June 30, 2020, one member of the Southeast Ohio Radio Adventure Team performed a successful activation of Chief Cornstalk Wildlife Management Area in West Virginia as part of the Parks on the Air (POTA; link) program. This was the first CW POTA activation of Chief Cornstalk WMA. Eric was accompanied by his wife, Vickie, and their two dogs, Mindy and Theo.

At about 1845 UTC, Eric, Vickie, and the dogs arrived at the road Eric believed to be the road to the Chief Cornstalk WMA parking area but, as at his recent visit to Sand Hill WMA, found a locked gate across the road. Having passed the large WMA sign (photo) miles back, Eric was confident he was well inside Chief Cornstalk WMA, and he decided to set up and operate at the locked gate. Eric deployed his 28½' wire vertical on his Jackite 31' telescoping fiberglass mast and drive-on mount and, because it was a beautiful day and the trees covering the road provided ample shade, he set up his KX3 on his folding camp-chair adjacent to the car and mast. Eric was on the air by 1908 UTC.

Eric wasn't surprised to find he had no cell-signal whatsover this far from the major highway but hoped that the POTA Spots website (link) would properly spot him based on Reverse Beacon Network (RBN) spots.

Eric began operations on 80m, hoping to be spotted and hoping that he could give a QSO to his good friend K8RAT. Unfortunately, many minutes of calling "CQ POTA" passed with no replies, so Eric switched to 40m at 1915 UTC. 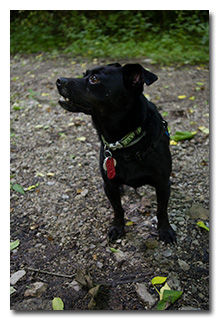 On 40m, Eric had to call "CQ Pota" for only a couple of minutes before his call was answered at 1917 UTC by N3XLS in Pennsylvania. Eric asked if he had been spotted and 'XLS replied that, yes, he had been. Eric must have been spotted because QSOs on 40m came steadily, with Eric's seventh QSO coming at 1926 UTC with WA3TVH in Pennsylvania. This run of QSOs included a Park-to-Park (P2P) QSO with KU8T who was performing a POTA activation of Mt Etna on Salamonie Lake State Recreation Area (K-4179) in Indiana. When replies stopped coming to Eric's CQs, he switched to 20m at 1931 UTC.

Still hoping to give K8RAT a QSO, Eric returned to 80m at 1952 UTC and called CQ for several minutes with no responses. Eric decided to shut down at 2000 UTC.

In all, Eric made twelve QSOs. All of Eric's QSOs were CW and were made at the 5-watt level.

During this whole activation, Eric struggled with his Whiterook MK-33 paddle which he uses as a cootie-key and which sounded very dirty. The old telegrapher's trick of cleaning the contacts with a dollar bill didn't improve the situation so Eric soldiered on and sent the best CW the dirty key would allow him to send. Eric apologizes to the stations he worked who had to struggle to copy the poor code!

On the way home, Eric, Vickie, and the dogs stopped in Point Pleasant, WV, for a brief visit to Tu-Endie-Wei State Park (K-1823), at the confluence of the Ohio and Kanawha Rivers, which Eric had activated in March of 2019 (link). Eric did not operate from Tu-Endie-Wei during this visit, however.