The 7,061-acre Amherst-Plymouth Wildlife Management Area (WMA) is forested in young oak and hickory. Its terrain consists chiefly of low ridges and small valleys that descend toward bottomland along the Kanawha River. 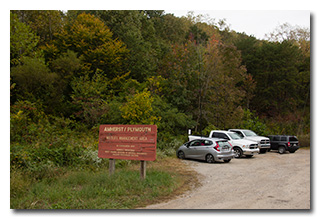 Eric McFadden, WD8RIF, performed the activation of Amherst/Plymouth Wildlife Management Area on the gated Plymouth Hollow Road, with road construction underway on the adjacent highway, and rain from the remnants of Hurricane Delta falling. Eric was accompanied by his wife Vickie and their small dogs, Theo and Mindy.

Eric, Vickie, and the dogs arrived at the Plymouth Hollow Road area at about 1400 UTC, about thirty minutes later than Eric had planned to arrive. Eric had hoped to proceed up Plymouth Hollow Road to one of the several open areas visible on the Google satellite view but found the road to be gated and locked a few hundred feet beyond the WMA sign. Eric then thought to set up his station in the pull-off across Plymouth Road from the WMA sign, but upon finding a dead fox and a dead raccoon on a pile of brush there, he decided to set up in the parking area adjacent to the WMA sign, the parking area that was occupied by pickup trucks and an SUV of the roadway construction workers. Fortunately, there was still ample space for the Honda Fit and, while Vickie walked the dogs, Eric deployed his 28½' wire antenna on his 31' Jackite telescoping fiberglass mast and drive-on base. Because of the continuing rain, Eric set up his KX3 inside the car and was on the air by 1416 UTC.

Eric was pleased to find he had good cell-signal at the site and was able to spot himself to the POTA Spots website.

Switching to 40m to run his own frequency, Eric had a run of eleven QSOs in twelve minutes, starting with a QSO at 1440 UTC with big-time POTA Hunter VE3LDT in Ontario and ending with a QSO at 1452 UTC with KO4YB in Alabama. This run of QSOs included a P2P QSO with K0BWR who was activating McPherson State Fishing Lake (K-7417) in Kansas.

Eric switched to 20m at 1455 UTC but several minutes of calling CQ resulted in no replies. Taking a final opportunity to hunt parks, at 1503 UTC Eric managed a P2P QSO on 40m with WK4WC who was activating Dreher Island State Park (K-2893) in South Carolina.

In all, Eric made nineteen QSOs, of which six were P2P QSOs. All of Eric's QSOs were CW and were made at the 5-watt level.