The 3,201-acre Plum Orchard Lake Wildlife Management Area ranges across a forest of oak and hickory in a wide cove between Packs and Haystack mountains in western Fayette County. The area is a drive of approximately eight miles from the New River Gorge National Park and Preserve.

Though established as a public hunting and fishing area, the state-managed preserve may best be known as the location of 202-acre Plum Orchard Lake, a notably popular destination for flat-water kayaking. 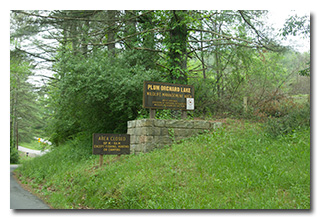 On Sunday, May 22, 2022, three members of the Southeast Ohio Radio Adventure Team performed successful activations of Plum Orchard Lake Wildlife Management Area in West Virginia as part of the Parks on the Air (POTA; link) program.

Following the breaking of camp, checking out of the campground, and a final activation of Babcock State Park (link), the trio (plus Theo) drove in caravan to the north end of Plum Orchard Lake Wildlife Management Area for the final activations of the RATpedition. A few minutes of exploration led them to the lake access point at the end of Park Forest Road 824, which they decided would be a good location to perform the activations.

In an effort to get as much distance between the stations, Thomas and Eric chose diagonal corners of the roughly rectangular parking area. 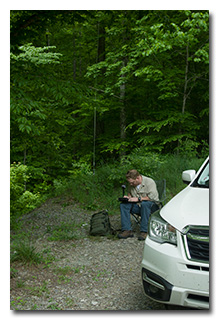 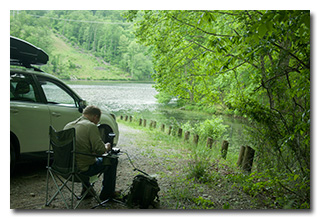 
Because of the threat of rain, Eric had originally planned to deploy his 28½' wire vertical on his 31' Jackite telescoping fiberglass mast supported on his drive-on base and operate inside the car but he was unable to find the required PVC pipe for his base. (Was it somewhere inside the over-packed car? Had it been forgotten at the Babcock State Park campground?) Instead, Eric chose to bungee his 31' Jackite pole to a convenient gatepost and deploy his half-size W3EDP antenna as an inverted-vee. Discounting the threat of rain, Eric chose to operate outside, seated in his folding camp-chair. 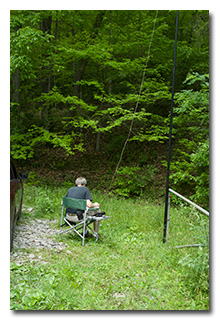 
While Eric had sufficient cell-signal to access POTA Spots (link) to spot himself and to look for park-to-park (P2P) QSO opportunities, Thomas found he had only enough signal to text his friend Mike, K8RAT, for spotting support.

Eric began operations on 30m and his first QSO came at 1726 UTC with K8EK in Michigan. QSOs came steadily, with Eric's seventh QSO coming at 1738 UTC with K9IS in Wisconsin. This run included QSOs with operators located in Michigan, New York, North Carolina (2), Delaware, Florida, and Wisconsin. Sometime during this run, the rain started and Eric was forced to hunker under a military poncho to protect his logsheets and KX3 transceiver. 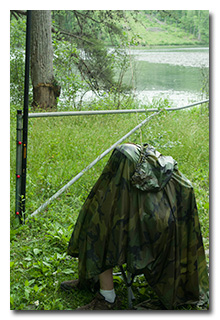 Eric operating in the rain;
photo by Miles McFadden


Switching to 40m, Eric's first QSO on that band came at 1843 UTC with KG4BIG in Kentucky. This was followed in quick succession by QSOs with K8HU in Virginia, N8SCO in West Virginia, and N4OOT in Virginia.

Pausing to check POTA Spots, at 1750 UTC Eric made a P2P QSO with Thomas on 17m, ensuring that both operators would receive hunter- and P2P-credit for Plum Orchard Lake Wildlife Management Area. This was followed at 1752 by a second P2P QSO with Thomas, this time on 30m.

In all Eric made thirteen QSOs, including two P2P QSOs. All of Eric's QSOs were CW and were made with five watts output.

Thomas's report will be available soon on his blog, QRPer.com.

The rain stopped in time for station tear-down and left behind a dramatic sky. 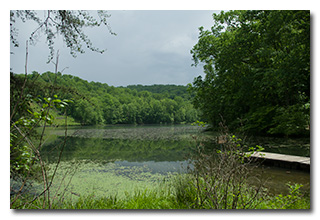 After the rain: Plum Orchard Lake


As at the previous activations during this RATpedition, Thomas and Eric found that interference between their stations was minimized by operating on bands not harmonically related and by trying to establish distance between the stations.

Following the end of this activation, the trio traveled in caravan to Tamarack Marketplace in Beckley for lunch. After a fine lunch and desert, the group separated, Thomas to return to his home in western North Carolina, and Eric, Miles, and Theo to return to their home in southeastern Ohio, The Roaring Waters of West Virginia RATpedition having come to its conclusion.

Oh—and the missing piece of Eric's drive-on base? It was found inside Thomas's Subaru Forester after station tear-down.