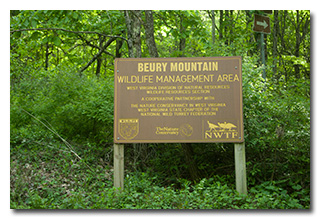 On Thursday, May 19, 2022, three members of the Southeast Ohio Radio Adventure Team performed successful activations of Beury Mountain Wildlife Management Area in West Virginia as part of the Parks on the Air (POTA; link) program.

After meeting at Babcock State Park and setting up camp, the trio plus Theo made the very short drive to Sewell Road within Beury Mountain Wildlife Management Area. After a little bit of exploration, a suitable operating location was chosen and two stations were deployed. Eric's station consisted of his Elecraft KX3 and his 28½' wire vertical supported on a 31' Jackite telescoping fiberglass mast and drive-on base. Tom's station consisted of his Elecraft KX2 and an end-fed wire antenna hung from a tree. 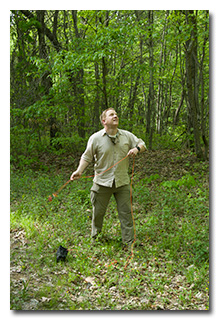 
Surprisingly, both Eric and Tom found they had good cell-signal at the chosen location, and they were able to spot themselves to POTA Spots (link) and use POTA Spots to identify possible park-to-park (P2P) QSO opportunities. 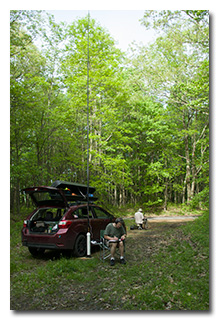 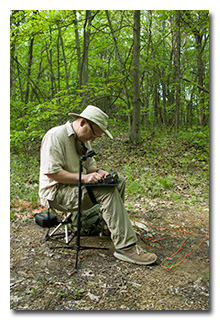 Thomas operates and records video for his blog


Eric began his operation by checking POTA Spots for P2P QSO opportunities and at 2139 UTC he made a P2P QSO on 20m with N0VRP who was activating Tuttle Creek Willow State Fishing Lake (K-7399) in Kansas.

Finding himself a frequency to run on 20m, Eric spotted himself and began calling CQ. His first QSO in this run came at 2144 UTC with VE3DQN in Ontario. QSOs came briskly, with Eric's twenty-first QSO in this run coming at 2208 UTC with NC8I in Florida. This run included a P2P QSO with WA7RAR who was activating Umpqua National Forest (K-4386) in Oregon, a QSO with ON4VT in Belgium, and QSOs with operators located in Ontaria, New York, Maine, Oregon, California, Texas (4), Arizona (2), Oklahoma (2), Florida (2), Arkansas, Idaho (2), Washington, and Louisiana.

Eric finished his activation by making an unscheduled P2P QSO at 2211 UTC on 40m with K4SWL so that both operators would receive hunter- and P2P-credit for Beury Mountain Wildlife Management Area.

In all, Eric made twenty-three QSOs, including three P2P QSOs. All of Eric's QSOs were CW and were made with five watts output.

Details of Thomas's activation will soon be available on his blog at QRPer.com.

Miles did not operate but helped with set-up and tear-down, did much of the activation photography, and took care of little Theo-dog while Eric and Thomas operated.

Eric and Thomas found that they generated the least mutual-interference when they operated on non-harmonically-related bands—for instance, on 20m and 30m, or on 17m and 40m. This restriction wasn't onerous and both operators were easily able to validate their activations by making the required ten QSOs. 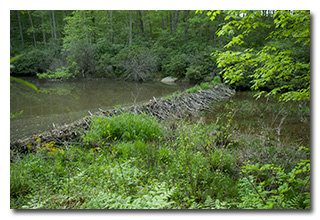 A beaver dam near within the Beury Mountain Wildlife Management Area


UPDATE: Read the report (and watch the video) by Thomas about his his experience at Beury Mountain Wildlife Management Area: https://qrper.com/2022/07/pota-activation-with-wd8rif-at-beury-mountain-wma-in-west-virginia/.

Eric also submitted his log to the World Wide Flora and Fauna in Amateur Radio (WWFF; link) program for KFF-5656.