From the West Virgina Explorer page:

The 13,590-acre Lewis Wetzel Wildlife Management Area (WMA) ranges across a forest of oak and hickory and cove hardwood that climb moderate and steep slopes from the banks of the south fork of Fishing Creek. Its namesake, Lewis Wetzel, was an explorer and frontiersman renowned for his violent interactions with the Shawnee and others who named him "Death Wind." Wetzel is buried near the Palace of Gold near Wheeling, West Virginia, in Marshall County. 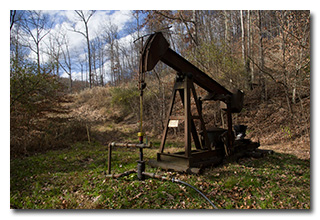 On Tuesday, November 10, 2020, two members of the Southeast Ohio Radio Adventure Team performed a successful activation of Lewis Wetzel Wildlife Management Area in West Virginia as part of the Parks on the Air (POTA; link) program.

The pair arrived at a suitable operating locations in the WMA at about 1720 UTC and after a bit of a walk with Theo, set up Eric's station. They deployed Eric's 28½' wire antenna on his 31' Jackite telescoping fiberglass mast and drive-on base. Because of the very pleasant weather, Eric set up his station on a folding camp-chair adjacent to the mast. Eric was on the air at 1739 UTC. 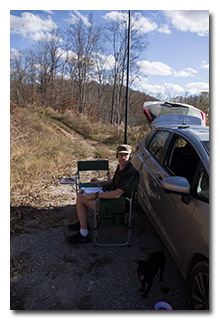 Eric had no cell-signal at the operating location and was unable to send texts or to self-spot himself on the POTA Spots website. Partway through the activation, Miles found he had sufficient signal to send texts.

Eric began operations on 80m, hoping he would be heard by the Reverse Beacon Network and spotted to the POTA Spots website as being at his previous location, and that his friend K8RAT would see and correct the spot. After almost fifteen minutes of no replies to his calls, Eric switched to 40m to call "CQ POTA". It was about this time that Miles discovered he could send and receive texts and sent a text to K8RAT asking for spot-assistance. Mike obliged, and Eric's first QSO came at 1757 UTC with K2TPZ in Maryland. QSOs thereafter came quite quickly, with Eric's twenty-second QSO coming at 1819 UTC with N4EX in Wisconsin.

Returning to 80m, Eric's first QSO there came at 1824 UTC with his friend K8RAT in Ohio. QSOs came quickly, with Eric's fifth QSO on 80m coming at 1831 UTC with KW4FM in Virginia.

In all, Eric made thirty-three QSOs. All of Eric's QSOs were CW and were made at the 5-watt level. Miles did not operate but helped with navigation, set-up and tear-down, and photography. 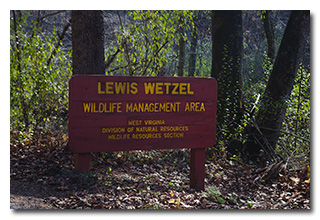 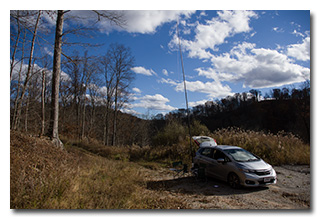