From the West Virgina Explorer entry:

The 55-acre Burches Run Wildlife Management Area (WMA) is covered mostly in wetlands and mature oak and hickory forests that ascend gentle hillsides from an elevation of 780 to 900 feet above sea level. Game traditionally hunted in the management area includes deer, squirrel, and waterfowl, though hunting is limited by its relatively small size. Burches Run Lake, which formerly occupied a significant part of the area, has since been drained, and its floodplain is reverting to wetland. Camping is prohibited. 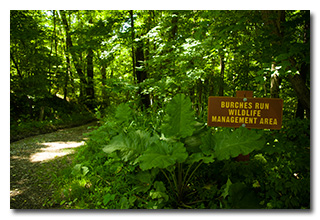 On Saturday, June 5, 2021, one member of the Southeast Ohio Radio Adventure Team performed a successful activation of Burches Run Wildlife Management Area in West Virgina as part of the Parks on the Air (POTA; link) program. This was to be the third of four parks to be visited on the second day of a two-day outing, with two parks having been visited the previous day. The parks previously visited in this outing were Shreve Lake Wildlife Area, Beach City Wildlife Area, Egypt Valley Wildlife Area, and Willow Grove State Forest. This was the first CW POTA activation of Burches Run Wildlife Management Area.

After having left his son Miles at the 220th EIS at the Zanesville Air National Guard Base, and while taking a very roundabout route from Zanesville back to Athens, Eric McFadden (WD8RIF) activated Burches Run Wildlife Management Area on a beautiful, sunny afternoon. 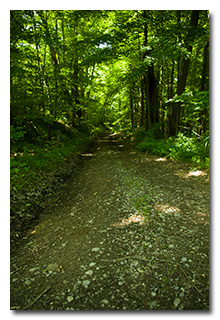 Eric arrived at the Burches Run Wildlife Management Area to discover that what the WMA's offical PDF map (link) had shown as an "unimproved road" into the WMA was, in fact, a private driveway or, perhaps, that the unimproved road was so hard to see that he just didn't find it.

Eric continued driving uphill on Big Wheeling Creek Road and soon found a Burches Run Wildlife Management Area sign and a narrow, steep, road or trail leading down toward Burches Run. This road was a road that Eric didn't think his Honda Fit could negotiate but, fortunately, a wide-spot existed at the intersection, so Eric chose to set up his station there. Carefully positioning his car so that it didn't block access to the WMA road while at the same time placing his mast in a clear space among the trees, Eric deployed his 28½' wire antenna on his 31' Jackite telescoping fiberglass mast and drive-on mount. Eric set up his KX3 inside the car and was on the air at 1538 UTC.

Eric wasn't surprised to find he had no cell-signal at this location. Against such an eventuality, Eric had announced his activation on the POTA Activations webpage and had arranged for his friends K8RAT and K4SWL to watch the Reverse Beacon Network (RBN) and spot him to POTA Spots when he was heard by the RBN. 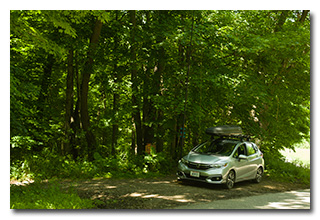 Switching to 40m, Eric made eighteen QSOs in less than half and hour, thanks to spotting-support provided by his friends.

In all, Eric made nineteen QSOs in about forty-one minutes. All of Eric's QSOs were CW and were made at the 5-watt level.