Jesse Owens State Park is a success story in environmental stewardship, conservation and reclaiming land for outdoor recreation. Located in Morgan County and surrounded by thousands of acres of land open to public use, the park is teeming with wildlife. 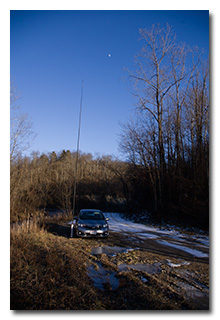 On Saturday, January 23, 2021, one member of the Southeast Ohio Radio Adventure Team performed a successful activation of Jesse Owens State Park in Ohio as part of the Parks on the Air (POTA; link) program.

Eric McFadden, WD8RIF, performed the activation of Jesse Owens State Park at a boat-ramp area on "F to C Access Road" on on a cold but sunny day. Eric was accompanied by little dog Theo.

Eric and Theo arrived at the boat ramp on "F to C Access Road" at about 2030 UTC. Eric parked and deployed his 28½' wire antenna on his 31' Jackite telescoping fiberglass mast and drive-on base. Choosing to operate inside the car, deploying his KX3 on the mobile-mount on the car's dashboard. Eric was on the air at 2041 UTC.

Eric was surprised and pleased to find he had sufficient cell-signal to allow him to view the POTA Spots webpage. 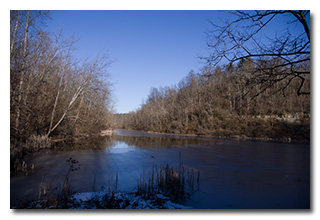 Finding his own frequency on 80m, Eric's first QSO there came at 2056 UTC with his friend K8RAT in Ohio. This was followed at 2057 UTC by a QSO with K2EKM in Virginia. Eric's final 80m QSO came at 2101 UTC with W5GDW in North Carolina.

Switching to 40m, Eric's first QSO on his own frequency came at 2106 UTC with VE3DQN in Ontario. QSOs came quickly, with Eric's twentieth QSO on 40m coming at 2127 UTC with K4EES. This run included a second P2P QSO with NK8O at Ponce De Leon Springs State Park (K-1911) in Florida.

In all, Eric made twenty-seven QSOs, including five P2P QSOs. All of Eric's QSOs were CW and were made at the 5-watt level.