The Atkinson Ridge Fire Tower was constructed in 1929 on land donated to the state by, Homer Atkinson of McArthur, Ohio. The 60-foot Aermotor tower has a 7-foot by 7-foot metal cab. The Aermotor company has built windmills since 1888. However, starting in 1926, Aermotor diversified to include the design and production of most of the nation's forest observation towers. In 1929, the total cost to build a 60-foot fire tower, including materials, labor, and transportation, was around $1,100.

Beginning in the 1920s and 1930s, fire wardens and foresters used wildfire lookout towers to spot blazes on Ohio lands. Ohio's fire towers were staffed by lookouts and equipped with binoculars, maps, a radio, telephone, and an alidade – a device used to pinpoint a wildfire location.

Aerial surveillance of wildfires by aircraft began in the 1940s, and Ohio's fire towers were slowly phased out. The last tower was closed in 1978. While monitoring from fire towers is a thing of the past, they remain a proud symbol of forest conservation and a monument to the people who worked to preserve our natural resources.

When weather conditions allow, visitors can climb the stairs of the tower at their own risk. From the top of the tower, the Atkinson Ridge Fire Tower provides a magnificent 360-degree view of the surrounding forests and hills. 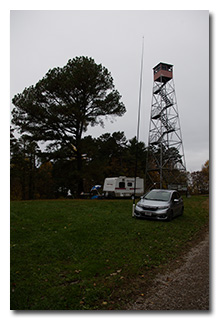 On Saturday, October 24, 2020, one member of the Southeast Ohio Radio Adventure Team performed a successful activation of Zaleski State Forest in Ohio as part of the Parks on the Air (POTA; link) program.

On a crisp but overcast Fall day, Eric McFadden, WD8RIF, performed the activation of Zaleski State Forest at the Atkinson Ridge Lookout Tower and Hunters Camp. Eric was accompanied by his wife Vickie, his daughter Kate, and their dogs Theo, Mindy, and Bo.

The crew arrived at the Lookout Tower at about 1740 UTC. Eric was somewhat surprised at the number of campers and tents in the area but, after finding a suitable place to park, Eric deployed his 28½' wire antenna on his 31' Jackite telescoping fiberglass mast and drive-on base. Because of the cool temperature, Eric set up his KX3 inside the car and was on the air by 1753 UTC.

Checking for cell-signal, Eric was pleased to find he had sufficient signal to enable texting and to fully access the POTA Spots website, so he was able to self-spot himself as well as to look for park-to-park (P2P) QSO opportunities.

Eric began operations on 80m and his first QSO came at 1756 UTC with his friend K8RAT in Ohio. Eric's second and final QSO on 80m came at 1758 UTC with AB9CA in Indiana.

Switching to 40m, Eric's first QSO there came at 1806 UTC and was a second QSO with AB9CA in Indiana. QSOs came steadily, with Eric's eleventh QSO on 40m coming at 1826 UTC with K4CAE in South Carolina. Taking a break to hunt for P2P QSOs, Eric made a P2P QSO at 1828 UTC with KN4RBN who was performing an activation of Horne Creek Living Historical Farm State Historic Site (K-6845) in North Carolina.

Switching to 30m, Eric's first QSO there came at 1832 UTC with K1ETA in Rhode Island. QSOs came steadily, with Eric's fifth and final QSO on 30m coming at 1838 UTC with N0TOP in Missouri.

In all, Eric made nineteen QSOs, including one P2P QSO. All of Eric's QSOs were CW and were made at the 5-watt level.

Eric was disappointed that, because of COVID-19, the Atkinson Ridge Lookout Tower was not open for climbing—in fact, the entire bottom flight of steps had been removed to prevent climbing. Eric had been looking forward to seeing the Fall colors from the vista provided by the tower.