The Zaleski State Forest is the second largest forest in Ohio's system of state forests. 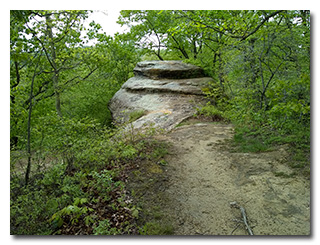 One member of the Southeast Ohio Radio Adventure Team succeeded in performing a valid activation of Zaleski State Forest, K-5455, in Ohio as part of the the Parks on the Air (POTA; link) program. Eric McFadden, WD8RIF, visited Zaleski State Forest with his small dog, Theo, on a cool, overcast spring day.

Eric and Theo arrived at "Lookout Rock" in Zaleski State Forest around 1445 UTC and after noticing the vast amount of poison-ivy to keep Theo out of, Eric quickly set up his station. Eric chose to deploy his under-test 58' end-fed wire as an inverted-L, using his 33' MFJ-1910 fiberglass mast to support the wire. He arranged a 28½' wire as a radial directly under the inverted-L and one 17' wire as a radial directly opposite the first radial. Because of the possibility of rain, Eric chose to operate inside his car. Eric was on the air by 1507 UTC.

Because he had hoped the 58' inverted-L would act as a low-band NVIS antenna, Eric started operations on 80m in the hopes that a QSO with his friend and POTA-Hunter K8RAT could be made. Unfortunately, it appeared K8RAT couldn't hear Eric on 80m. Moving to 60m for the same test, again, it appeared Mike could not hear Eric.

Moving to 40m, Eric was rewarded with three pretty quick replies to his calls of "CQ POTA" but then replies stopped.

Moving to 20m, Eric chose to concentrate on working stations who were participating in the 7th Call District QSO Party (7QP) and in less than thirty minutes he worked eight stations. Because he was already going to be late to his next activation, Eric called the activation complete and tore down the station.