Additional points of interest along this trail are two unique and historic tunnels. King’s Hollow Tunnel (also known as King Switch Tunnel) is a 120-foot structure carved through the rock and lined by a series of 12×12 wooden beams. The Moonville Tunnel is brick-lined and has a long history of train accidents, earning the tunnel a reputation for being haunted.

On Friday, June 10, 2022, one member of the Southeast Ohio Radio Adventure Team performed successful bicycle-portable activations of Zaleski State Forest and Lake Hope State Park in Ohio as part of the Parks on the Air (POTA; link) program .

Because he strongly suspected he would have no cell-signal anywhere within Zaleski State Forest along the Moonville Rail Trail, before departing from his home, Eric announced his upcoming activation of Zaleski State Forest on POTA Spots (link) in the hopes that when the Reverse Beacon Network (RBN, link), the POTA/RBN integration would work properly to spot him on POTA Spots.

As he had expected, Eric found numerous trees down along the Moonville Rail Trail, and no trail-restoration had yet taken place. Most of the downed trees were small and didn't completely block the trail, but one tree near Mineral was large and completely blocked the trail. Eric was able to carry his bicycle over the trunk of the tree and through the boughs in order to carry on with his ride. 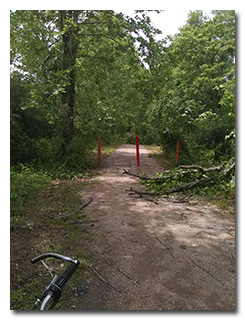 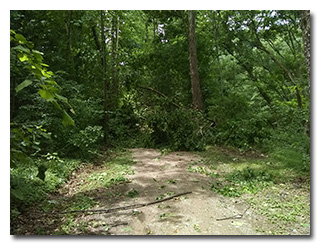 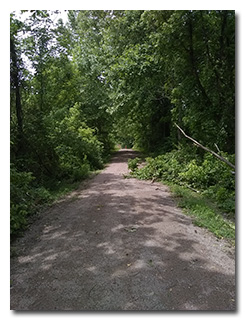 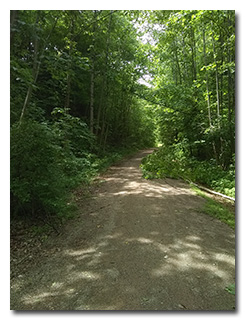 
Eric chose the Moonville Rail Trail's "Picnic Area A" as the location for his activation of Zaleski State Forest. Because he had built his K1 Travel Kit specifically for bicycle-portable radio operations, this is the station Eric had with him on this occasion. To support his 28½' wire antenna, Eric bungeed his Goture Red Fox Super Hard 720 carbon-fiber mast securely between his bicycle's second water-bottle cage and his bicycle's top-tube. Since the Goture mast is only about 17' tall, Eric deployed his 28½' wire as sloper Placing his Elecraft K1 on the ground, Eric was on the air at 1720 UTC. 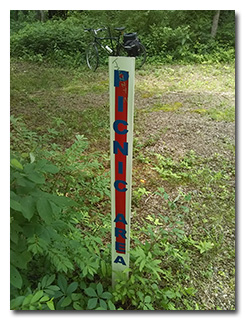 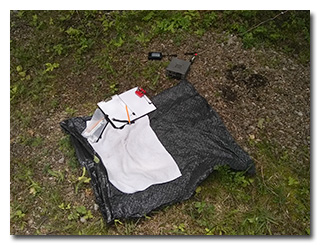 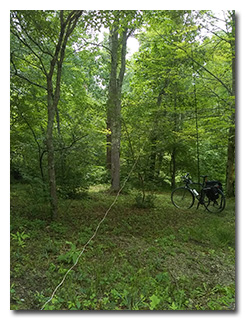 
As he had expected, Eric found he had no cell signal whatsover, and he wasn't able to sent texts, spot himself to POTA Spots, or to check POTA Spots for park-to-park (P2P) QSO opportunities. Eric would have to trust that the POTA Spots Reverse Beacon Network (RBN) spotting algorithm would spot Eric automatically, or that his friends K4SWL and K8RAT would see Eric spotted on RBN and manually spot Eric to POTA Spots.

Eric began his activation of Zaleski State Forest on 40m, finding himself a frequency to run and calling CQ, hoping that one way or another he would be spotted on POTA Spots. After fourteen minutes of calling CQ, Eric was rewarded with a QSO at 1734 UTC with K2UPD in Kentucky. At 1739 UTC, a very weak N4EX in North Carolina answered Eric's CQ but he faded away completely before a QSO could be completed.

Hoping for better results, Eric switched to 20m and called CQ for many minutes but he could hear no one answering his calls.

Having no way to check, Eric assumed he wasn't being spotted to POTA Spots. Tuning through 20m and 40m also told him that propagation conditions were really poor. Having had to spend about thirty minutes to complete just a single QSO, Eric decided to tear down his station and continue his ride to Keeton Cemetery within Lake Hope State Park and try to complete his activation of Zaleski State Forest there while simultaneously activating Lake Hope State Park.

A few minutes of riding brought Eric to the intersection of the Moonville Rail Trail and Wheelabout Road. Leaving the trail, Eric rode the short distance to Lake Hope State Park's Park Road 9 and the 0.7 mile, 230' climb to Keeton Cemetery.

Arriving at Keeton Cemetery, Eric was very pleased to see that he did, as expected, have cell signal. 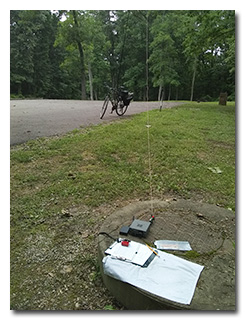 As he had done at Picnic Area A on the Moonville Rail Trail, Eric bungeed his Goture Red Fox Super Hard 720 carbon-fiber mast securely between his bicycle's second water-bottle cage and his bicycle's top-tube and deployed his 28½' wire as sloper. Placing his Elecraft K1 on a raised round concrete access-structure, Eric was on the air at 1828 UTC.

It was about at this point that Eric learned through an exchange of text-messages with K8RAT that Eric had, indeed, been spotted while he was operating at Picnic Area A and that the POTA Spots Reverse Beacon Network (RBN) spotting algorithm had been working properly. This told Eric that very poor propagation conditions were what had prevented Eric from making his ten QSOs on the Moonville Rail Trail, not a lack of being spotted.

Pausing to check POTA Spots for park-to-park (P2P) QSO opportunities, at 1846 UTC Eric made a P2P QSO on 20m with K2RB who was activating Collis P. Huntington State Park (K-1657) in Connecticut.

Returning to 20m to run a frequency, at 1854 UTC Eric completed a QSO with WA4RCW in Tennessee.

After fifteen minutes of fruitless CQs, at 1909 UTC Eric switched to 40m to try his luck there, but propagation continued to be unkind and no QSOs were completed on 40m.

Switching to 30m at 1915 UTC, Eric completed a QSO at 1921 UTC with AK9A in Wisconsin. Eric's subsequent calls of CQ on 30m went unanswered.

Returning to 20m to run a frequency, at 1934 UTC Eric completed a QSO with WI0S in Minnesota. This was followed by a P2P QSO at 1943 UTC with N7AO who was activating Uinta-Wasatch-Cache National Forest (K-4398) in either Idaho or Utah.

Combining the time he spent on the air at Picnic Area A on the Moonville Rail Trail and at Keeton Cemetery within Lake Hope State Park, it took Eric almost two hours to complete his activation of Zaleski State Forest with eleven QSOs completed at the two locations. It took Eric almost ninety minutes to validate his activation of Lake Hope State Park with ten QSOs. In all, Eric made eleven QSOs, including three P2P QSOs. All of Eric's QSOs were CW and were made with five watts output or less.

Eric tore down his station, repacked his bicycle, and rode back to his car in Mineral, Ohio, for a total distance of about seventeen miles bicycled.