Additional points of interest along this trail are two unique and historic tunnels. King’s Hollow Tunnel (also known as King Switch Tunnel) is a 120-foot structure carved through the rock and lined by a series of 12×12 wooden beams. The Moonville Tunnel is brick-lined and has a long history of train accidents, earning the tunnel a reputation for being haunted.

On Friday, June 3, 2022, one member of the Southeast Ohio Radio Adventure Team performed a successful bicycle-portable activations of Zaleski State Forest and Lake Hope State Park in Ohio as part of the Parks on the Air (POTA; link) program .

Because he strongly suspected he would have no cell-signal anywhere within Zaleski State Forest along the Moonville Rail Trail, before departing from his home Eric announced his upcoming activation of Zaleski State Forest on POTA Spots (link) in the hopes that when the Reverse Beacon Network (RBN, link), the POTA/RBN integration would work properly to spot him on POTA Spots.

Eric drove to Mineral, configured his bicycle, and began his ride on the Moonville Rail Trail toward Zaleski at almost exactly 1500 UTC.

The portion of the Moonville Rail Trail from Mineral to just beyond Moonville Tunnel is beautifully smooth, crushed gravel—easy and comfortable to ride on—with lovely scenery on both sides of the former railroad right-of-way.

One of the first landmarks a rider coming from Mineral encounters is the 120' long, timber-lined King's Hollow Tunnel. 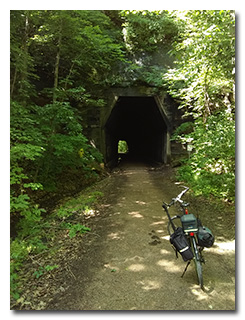 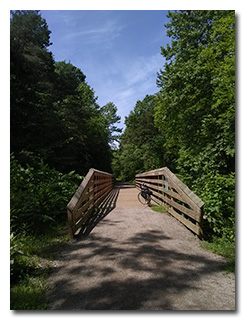 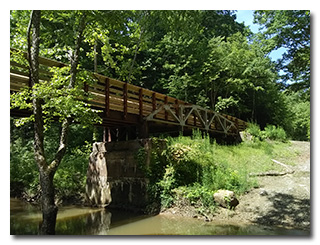 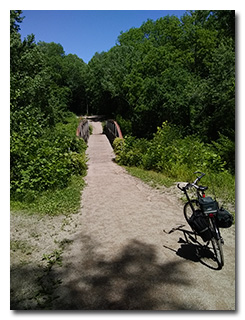 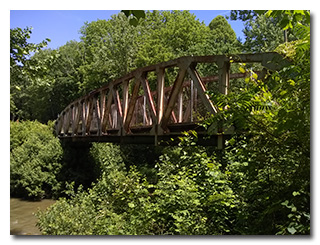 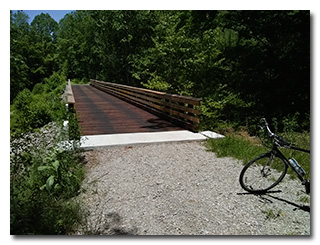 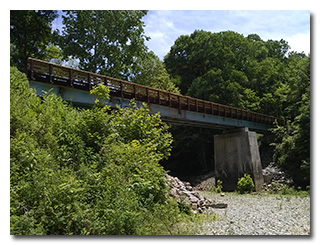 Some of the many bridges on the Moonville Rail Trail

Eric was told that a pair of nesting bald eagles lives in Bear Hollow, but he didn't see them this trip. 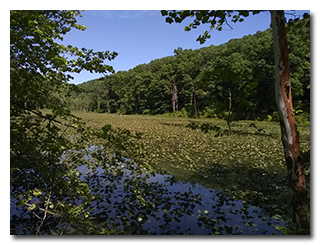 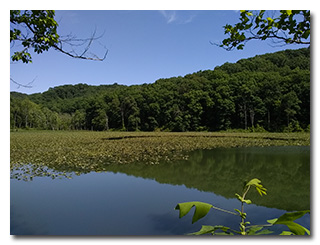 The pond at Bear Hollow

About halfway from Mineral to Zaleski, a rider on the Moonville Rail Trail will encounter the Moonville Tunnel—which some people say is haunted. 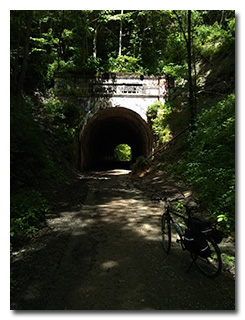 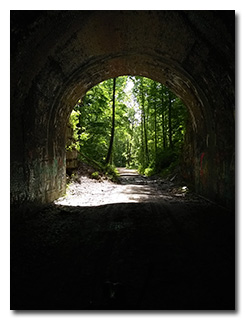 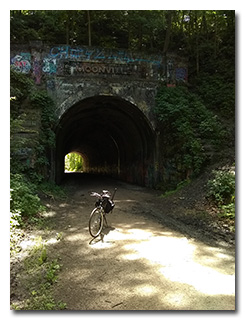 The Moonville Rail Trail's two missing bridges are found just beyond Moonville Tunnel. The portion of the Rail Trail with the missing bridges can be bypassed by following a 1-mile detour on the lightly-traveled, gravel Hope-Moonville Road. It was on this short detour that Eric finally found a suitable location to perform his activation of Zaleski State Park—a pull-off with a pair of downed tree-trunks suitable to serve as a radio-desk and a chair. 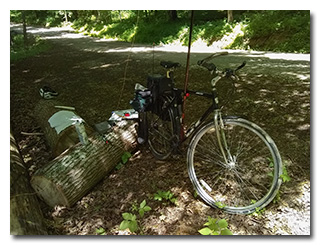 A contrasty photo of Eric's station within Zaleski State Forest

Because he had built his K1 Travel Kit specifically for bicycle-portable radio operations, this is the station Eric had with him on this occasion. To support his 28½' wire antenna, this time Eric tried something new: he bungeed his Goture Red Fox Super Hard 720 carbon-fiber mast securely between his bicycle's second water-bottle cage and his bicycle's top-tube. Since the Goture mast is only about 17' tall, Eric deployed his 28½' wire as an inverted vee, and tied the far end off on a small tree using a length of dental floss. Placing his Elecraft K1 on one of the tree-trunks, Eric was on the air at 1555 UTC.

To Eric's considerable surprise, he discovered he had enough cell-signal to be able to send and receive texts. He wouldn't be able to spot himself to POTA Spots, or to check POTA Spots for park-to-park (P2P) QSO opportunities, but he would be able to text his friends K8RAT and K4SWL, if needed, for spotting-assistance.

Eric began his activation of Zaleski State Forest on 20m, finding himself a frequency to run and calling CQ. Eric was pleased to learn that the POTA/RBN integration quickly placed a spot for him. Eric's first QSO came at 1558 UTC with WA4RCW in Tennessee. QSOs came steadily, with Eric's tenth QSO coming at 1619 UTC with WB2MQQ in New York. This run included a P2P QSO with N3RN who was activating PA 224 State Game Land (K-8921) in Pennsylvania, and QSOs with operators located in Tennessee (2), Arizona, New York, Kansas, Texas, South Carolina, Wisconsin, Pennsylvania, and New York.

Switching to 40m, Eric found a frequency to run, began calling CQ, and texted K8RAT and K4SWL to update his spot. Eric succeeded in making two QSOs on 40m. The first came at 1627 UTC with AI4SK in Alabama and the second came at 1628 UTC with KD5TXX in Kentucky.

In all, Eric made twelve QSOs, including one P2P QSO, during this activation of Zaleski State Park. All of Eric's QSOs were CW and were made with five watts output or less.

Eric tore down his station, repacked his bicycle, and rode the short distance to rejoin the Moonville Rail Trail. 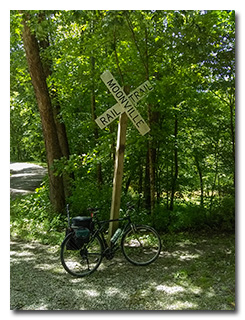 Eric chose the latter, to ride the Moonville Rail Trail to its terminus in Zaleski, but almost immediately he found that the portion of the rail trail between Wheelabout Road and Zaleski was very rough—at times it was so rough he found it painful on his solid-suspension bicycle, even with his tire-pressure set to a relatively soft 45psi. In fact, Eric found it so uncomfortable, upon reaching the intersection with SR-278, he chose to abandon the Moonville Rail Trail, to not ride the remaining fraction of a mile to the rail trail's terminus, choosing instead to ride to Lake Hope State Park on SR-278.

After the very rough Moonville Rail Trail, Eric found SR-278 to be smooth and fast and, despite the automobile traffic, to be a joy to ride. In a matter of 20 minutes or so, Eric reached Park Road 9 in Lake Hope State Park and began the slog up Park Road 9 to Keeton Cemetery.

At Keeton Cemetery, Eric found a round concrete access cover—water service, perhaps?—which would serve well as both a chair and radio desk. Eric placed his K1 upon this structure, strapped his Goture Red Fox Super Hard 720 carbon-fiber mast securely to his bicycle has he had done earlier on Hope-Moonville Road, hooked the end of his 28½' wire to the top of the Goture mast, extended the mast, and then positioned his bicycle to suspend his wire as a sloper. After deploying his three 17' counterpoise wires, Eric was on the air at 1812 UTC. 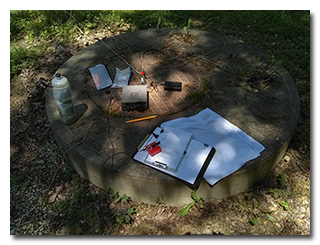 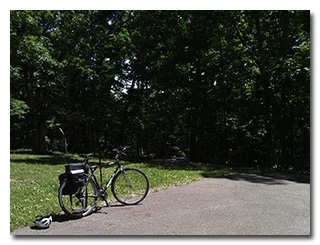 Having performed numerous two-fer activations of Lake Hope State Park and Zaleski State Forest at Keeton Cemetery, Eric was confident he would again find good cell signal at the site. Instead, he found that he had only enough cell signal to send and receive texts, and not enough to load the POTA Spots website. Since he hadn't previously announced his activation of Lake Hope State Park, and since his announcement and subsequent spots at Zaleski State Park had expired, Eric had to rely on his friends K8RAT and K4SWL to spot him.

Because Lake Hope State Park lies entirely within Zaleski State Forest, within POTA rules an activation of Lake Hope State Park is also a two-fer activation of Zaleski State Forest. Eric began his two-fer activation on 40m by finding himself a frequency to run and texting that frequency to K8RAT and K4SWL. Mike, K8RAT, initially had trouble getting his spot to take, but Thomas, K4SWL, was able to quickly spot Eric to POTA Spots. Eric's first QSO came at 1818 UTC and was a P2P QSO with KC9UR who was activating J. E. Roush Lake State Fish and Wildlife Area (K-4208) in Indiana. QSOs came steadily, with Eric's fifth QSO coming at 1829 UTC with KU4BB in Virginia. In addition to the P2P QSO, this run also included QSOs with operators located in Indiana, Tennessee, South Carolina, Wisconsin, and Virginia.

Finding himself a frequency to run on 20m, Eric began calling CQ and texted the frequency to K8RAT and K4SWL. Eric's first QSO on 20m came at 1834 UTC with WD2E in Florida. QSOs came quickly, with Eric's ninth QSO on 20m coming at 1846 UTC with WI1G in New Hampshire. This run included QSOs with operators located in Florida, Ohio, Rhode Island, Georgia, Alabama, New York (2), North Carolina, and New Hampshire. These paths seemed strange for 20m—these are the states normally served by 40m.

Because he had a long bicycle ride back to his car, Eric chose to end his two-fer activation, tear down his station, repack his bicycle, and begin the ride back to the Moonville Rail Trail and, thence, to his car in Mineral.

At Keeton Cemetery, Eric made fourteen QSOs, with one P2P QSO. This means he made fourteen QSOs, and one P2P QSO, for his activation of Lake Hope State Park, K-1968. Because his two operations in Zaleski State Forest, K-5455, occurred during the same UTC day, they combine into a single activation. This means his twelve QSOs on Hope-Moonville Road and his fourteen QSOs at Keeton Cemetery comprise a single activation of Zaleski State Forest, K-5455, with twenty-six QSOs and two P2P QSOs. All of Eric's QSOs were CW and were made with five watts of output power or less.

In total, Eric biked a total of 22.7 miles over an elapsed time of four hours and fifty minutes. His "moving time" was just under three hours.

View the map of Eric's ride: