Additional points of interest along this trail are two unique and historic tunnels. King’s Hollow Tunnel (also known as King Switch Tunnel) is a 120-foot structure carved through the rock and lined by a series of 12x12 wooden beams. The Moonville Tunnel is brick-lined and has a long history of train accidents, earning the tunnel a reputation for being haunted. 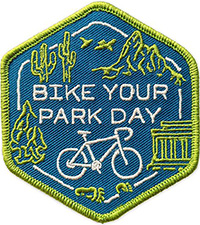 While participating in the Adventure Cycling Association's annual Bike Your Park Day (info), Eric McFadden, WD8RIF, rode the Moonville Rail Trail, on what used to be the Marietta & Cincinnati Railroad (wikipedia article) right-of-way, from the village of Mineral through Zaleski State Forest, diverted from the rail trail to ride to Grouse Point Trailhead in Lake Hope State Park for a two-fer activation of Lake Hope State Park and Zaleski State Forest, rode to Bolster Hollow Road for an activation of Turkey Ridge Wildlife Area, and then made his way back to the Moonville Rail Trail to return to Mineral. In this adventure, Eric was accompanied by Paul Schulz, WD8SCV, bike-packer and POTA activator.

Eric and Paul met at the Moonville Rail Trail trailhead in Mineral just before 10am and prepared their steeds for the ride. As usual, Eric was to ride his 1997-vintage steel GT Arette and would carry his KX3 Mini Travel Kit, his Goture Red Fox Super Hard 720 carbon-fiber mast, and two small stools. (Eric estimates he has ridden over 30,000 miles on this bicycle since he purchased it in 1998.) Paul was to ride his lovely blue, fat-tired, Surly Krampus equipped with a suspension-fork and hydraulic disc brakes, and he would carry his Icom IC-705 and a SOTABeams Band Hopper IV four-band dipole system.

Eric and Paul started their ride on the Moonville Rail Trail just after 10am, with an outside temperature measuring about 59°, and soon encountered the first landmark of the ride: the 120' long, timber-lined King's Hollow Tunnel. 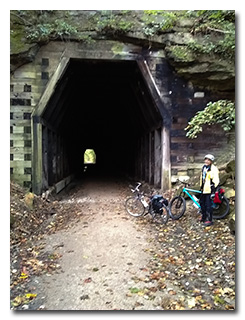 A poor-quality snap of Paul
at King's Hollow Tunnel. 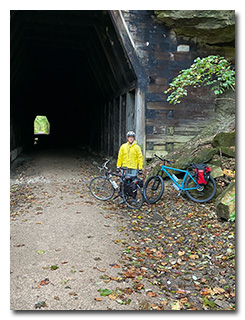 A fine-quality photo of Eric at King's
Hollow Tunnel; photo by Paul Schulz.

Riding through the very dark tunnel and continuing west on the Moonville Rail Trail, Eric and Paul soon came to the pond at Bear Hollow but, alas, the pair of nesting Bald Eagles were not to seen on this occasion. 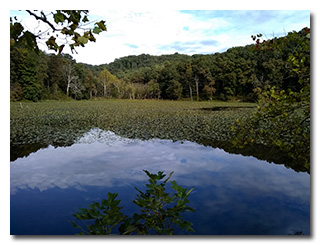 The pond at Bear Hollow.

Continuing west on the smooth rail trail, and now well inside the Zaleski State Forest, Eric and Paul came upon the brick-lined Moonville Tunnel (info). 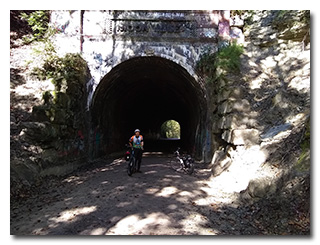 A contrasty snap of Paul at Moonville Tunnel.

As the Eric and Paul neared Lake Hope State Park, they left the Moonville Rail Trail and rode a short distance on Wheelabout Road to the historic Hope Schoolhouse (info) to take advantage of the available facilities and to shed layers, the outside temperature having by now risen well into the 60s. 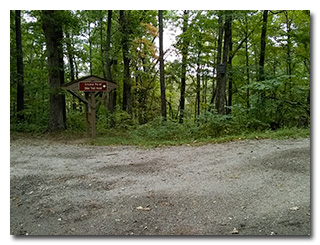 "This way to Grouse Point Trailhead."

Grouse Point Trailhead has a single picnic table and Paul—having not brought a chair—chose this as his operating location, quickly hanging his SOTABeams Band Hopper IV dipole from a conveniently located tree branch and deploying his ICOM IC-705 on the picnic table.

Choosing a location away from Paul, Eric deployed his 28½' wire antenna as a sloper with the top of the wire supported on his Goture Red Fox Super Hard 720 carbon-fiber mast securely bungeed to his bicycle. Eric deployed his KX3 on one of this two small stools and sat on the second stool during his activation. Eric and Paul were both on the air at about 1537 UTC.

As Paul had anticipated, Grouse Point Trail Head had very good cell signal, so Eric and Paul were able to spot themselves to POTA Spots (link) and to use POTA Spots to check for park-to-park (P2P) QSO opportunities.

Paul began his operation on 40m and operated using SSB, logging to an iPad. Paul quickly made the ten QSOs required to validate his activations and then made a few extra QSOs, finishing with seventeen QSOs in the log. 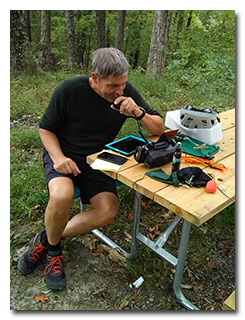 In order to minimize mutual interference with Paul's station, Eric began his operations on 30m. Finding himself a frequency to run, he spotted himself on POTA Spots and began calling "CQ POTA". Eric's first QSO came at 1540 UTC with WA4RCW in Tennessee. QSOs came steadily, with Eric's tenth QSO coming at 1556 UTC with AA4TB in South Carolina. This run included QSOs with operators located in Tennessee, North Carolina (3), Mississippi, Illinois (2), Virginia, Quebec, and South Carolina.

When 40m seemed to dry up, Eric switched to 20m, pleased to find little mutual interference between his station and Paul's, spotted himself, and began calling CQ. His first QSO on 20m came at 1605 UTC with N5GW in Mississippi. This was followed by a QSO at 1606 UTC with WB3DSJ in Florida.

Eric finished his operation by checking POTA Spots for P2P opportunities and at 1610 UTC he made a P2P QSO on 20m with KD8IE who was activating Skyway Fishing Pier State Park (K-1916) in Florida. This was Eric's thirteenth and final QSO.

All of Eric's QSOs were CW and were made at 5w output. 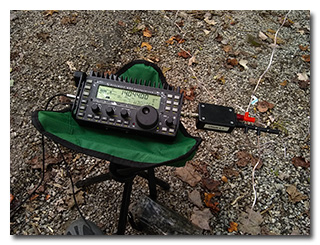 Eric's KX3 deployed on a stool. 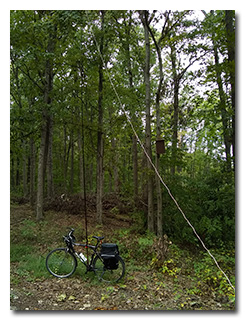 Eric's sloper supported by his bicycle. 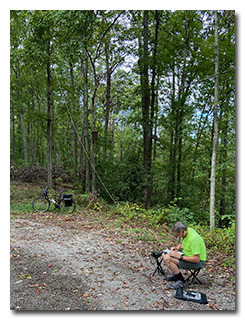 
After station tear-down, Paul and Eric enjoyed a quick picnic lunch, packed up their bicycles, and began their ride to Turkey Ridge Wildlife Area.

After descending the long hill back to the Lake Hope State Park entrance, Paul and Eric turned south on SR278, rode about 1½ miles to the base of Bolster Hollow Road, and rode about a mile up this gravel road to the point where Bolster Hollow Road enters Turkey Ridge Wildlife Area. Having driven this road in a car many times, but having never previously bicycled it, Eric found the climb to be longer and steeper than he had anticipated, but the climb turned out to be not very bad. However, the road itself, following its use as a special stage in the 2022 running of the Southern Ohio Forest Rally (info), had been re-graded with a combination of very fine sand and very large gravel, making stability on the climb a challenge for Eric on his relatively narrow 38C tires.

Paul and Eric arrived at the hairpin-turn within Turkey Ridge Wildlife Area at about 1720 UTC. Paul surveyed the two possible operating locations and, because of superior antenna-support trees, chose to set up at the hairpin itself, leaving Eric the wide spot slighly uphill from the hairpin for his operation.

Paul and Eric quickly deployed their stations, Paul hanging his SOTABeams dipole from a convenient branch and setting up his IC-705 on a towel on the ground. Eric again deployed his 28½' wire antenna as a sloper with the top of the wire supported on his Goture Red Fox Super Hard 720 carbon-fiber mast bungeed to his bicycle, and again deployed his KX3 on one of this two small stools. Paul and Eric were on the air about 1733 UTC.

Only minimal cell-signal was available at this location within Turkey Ridge Wildlife Area, with Eric having just enough signal to send and receive text messages. Without access to POTA Spots, Paul was able to use his IC-705's bandscope to find POTA activators to work as P2P QSOs and finally managed to get someone to spot him to POTA Spots, enabling him to finish his activation relatively quickly with fourteen QSOs. This was Paul's first activation of Turkey Ridge Wildlife Area. 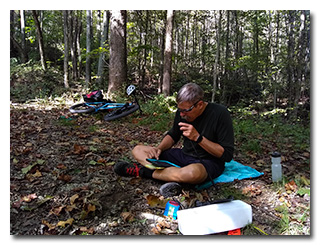 With Paul beginning his operation on 40m, Eric began his operation on 30m, texting his frequency to his buddies K8RAT and K4SWL and asking for them to spot him to POTA Spots. K8RAT was available to spot him and Eric's first QSO came at 1736 UTC with K9ABR in Illinois. QSOs came steadily, if not quickly, and his fourth QSO came at 1743 UTC with K4NAN in Tennessee. This run included QSOs with operators located in Illinois (2), Florida, and Tennessee.

With 30m seemingly dried-up, Eric changed to 20m, hoping that doing so wouldn't result in mutual interference between his station and Paul's. Finding a frequency to run, Eric texted the frequency to K8RAT and K4SWL, and began to call CQ. Eric's first QSO on 20m came at 1754 UTC and was a P2P QSO with KJ7DT who was activating Farewell Bend State Recreation Area (K-9147) in Oregon. QSOs came steadily, with Eric's ninth QSO on 20m coming at 1806 UTC with WB0MQA in South Dakota. This run included QSOs with stations location in Oregon, Texas, Kansas, Florida, Minnesota, Montana, Nova Scotia, Georgia, and South Dakota. Eric finished his operation with thirteen QSOs.

All of Eric's QSOs were CW and were made at 5w output.

As at the Lake Hope / Zaleski two-fer activation earlier in the day, Eric experienced no RF on his key while using the 4:1 unun between his KX3 and 28½' wire, further proof that he needs to build a 4:1 unun to keep permanently in the KX3 Mini Travel Kit. Additionally, the Talentcell 12v 3000mAh LiPO battery easily powered the KX3 through the two operations, an indication that this small and lightweight battery is a good choice to carry in the KX3 Mini Travel Kit. 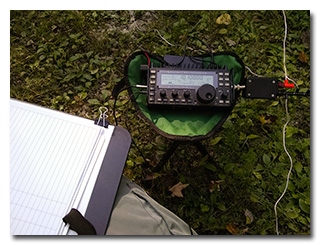 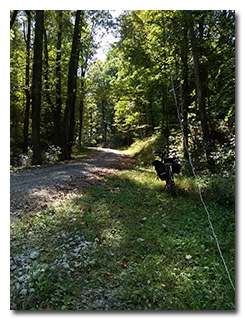 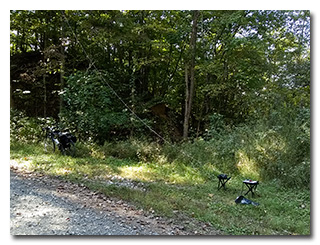 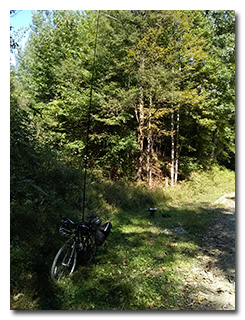 After tearing down their stations and re-packing their bicycles, Paul and Eric decided to continue the climb up Bolster Hollow Road instead of descending back down the way they had come. Climbing to the top of the ridge, they came upon the intersection of Bolster Hollow Road and Coalmont Hollow Road—the location where Eric and his son Miles had worked as radio operators during the 2022 running of the Southern Ohio Forest Rally—and turned onto left onto Coalmont Hollow to descend back to SR278. (In climbing Bolster Hollow and descending on Coalmont Hollow, Eric and Paul were bicycling the entire length of the Southern Ohio Forest Rally Bolster Hollow special stage, albeit at a much slower pace than the powerful rally cars had run through the stage.) Turning left onto SR278, they biked about a 1½ miles to a Moonville Rail Trail trailhead. 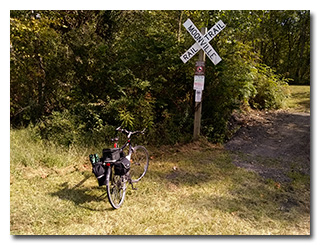 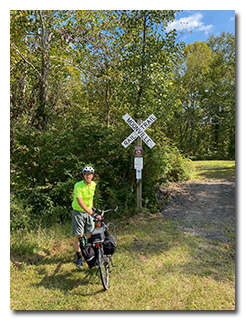 Turning left at the trailhead, Paul and Eric followed the Moonville Rail Trail east back to Mineral. 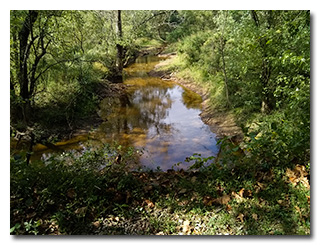 The Moonville Rail Trail crosses over a stream
on what appears to be the original railroad bridge. 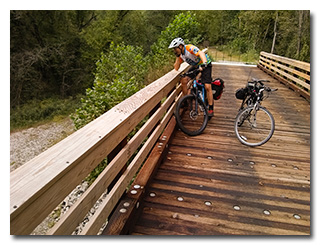 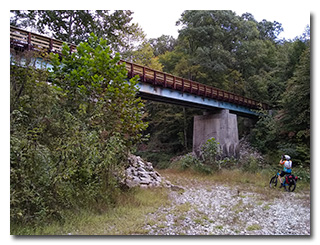 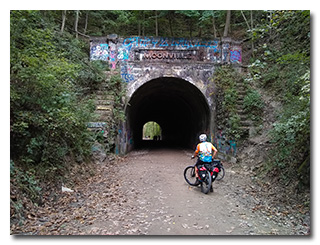 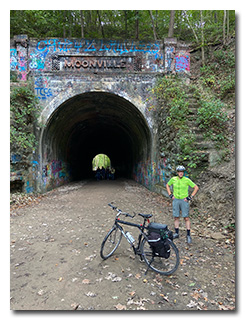 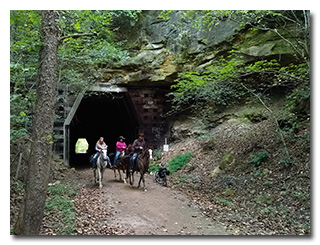 
Upon their arrival back at Mineral, Eric and Paul had ridden twenty-six miles, mostly on gravel, while climbing 1,583'. While this sort of riding is old-hat to Paul, Eric was pleased to find it hadn't been as challenging as he had anticipated it would be and looks forward to doing more of this sort of thing.