The forest is one of the most biologically diverse ecosystems in the United States and home to more than 50 years of ongoing forest research. Data collected at the forest has been cited in hundreds of scholarly papers on forest ecology, forest management, and wildlife. 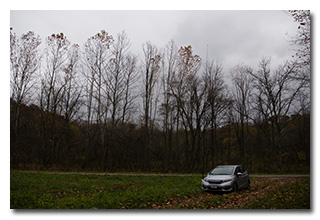 On Saturday, October 24, 2020, one member of the Southeast Ohio Radio Adventure Team performed a successful activation of Vinton Furnace State Forest in Ohio as part of the Parks on the Air (POTA; link) program.

On a crisp but overcast Fall day, Eric McFadden, WD8RIF, performed the activation of Vinton Furnace State Forest at a hunter's access area on Stone Quarry Road. Eric was accompanied by his wife Vickie and their dogs Theo and Mindy.

The quartet arrived at the hunter's access area on Stone Quarry Road at about 1900 UTC to find a truck already there, with hunters milling about. Not knowing if the hunters were arriving or departing, Eric chose to drive further down Stone Quarry Road to look for other possible locations. Not finding any place as suitable as the hunter's access area, Eric returned to find the truck still there but the hunters absent. Surmising that the hunters had, in fact, just arrived, Eric chose to set up and operate at the hunters area. After pulling his car as far onto the right edge of the drive as he dared, in case the hunters returned to their truck to leave, Eric deployed his 28½' wire antenna on his 31' Jackite telescoping fiberglass mast and drive-on base. Because of the cool temperature, Eric set up his KX3 inside the car and was on the air by 1926 UTC.

Eric had expected to have no cell signal at this site and was, therefore, pleasantly surprised to find he had sufficient signal to fully access the POTA Spots website, so he would be able to self-spot himself as well as to look for park-to-park (P2P) QSO opportunities.

Eric began operations on 80m and his first QSO came at 1930 UTC with W4SK in Tennessee. Eric's second and final QSO on 80m came at 1931 UTC with his friend K8RAT in Ohio.

Switching to 40m, Eric's first QSO there came at 1937 UTC with K1APJ. QSOs came quickly, with Eric's sixteenth QSO on 40m coming at 1953 UTC with NW2E who was operating portable on a beach in South Carolina with an Elecraft KX3 running 10-watts into an end-fed wire antenna.

In all, Eric made twenty QSOs, including two P2P QSOs. All of Eric's QSOs were CW and were made at the 5-watt level.