The forest is home to the state's largest known population of bobcats and is also home to timber rattlesnakes, cerulean warblers and several rare plant species. 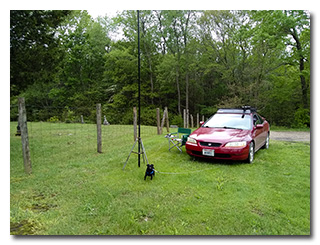 Eric and Theo arrived at Baird Cemetery (it's called "Beard Cemetery" on the Vinton Furnace State Forest maps) in Vinton Furnace State Forest around 1730 UTC and Eric quickly set up his station. Eric chose to deploy his under-test 58' end-fed wire as an inverted-vee, using his 33' MFJ-1910 fiberglass mast to support the center of the span. He arranged a 28½' wire as a radial directly under the inverted-vee, one 17' wire as a radial directly opposite the first radial, and a second 17' wire at a right angle to the first two. Eric initially set up his KX3 on a chair outside the car but when the sky began to look threatening, he moved the KX3, et al, into the car. Eric was on the air by 1743 UTC.

Because he had hoped the 58' inverted-vee would act as a low-band NVIS antenna, Eric started operations on 80m in the hopes that a QSO with his friend and POTA-Hunter K8RAT could be made. Eric was surprised to find he had cellphone service in the middle of the state forest but was pleased he and K8RAT could coordinate their test via telephone. As at previous tests with the 58' wire, though, Eric could hear Mike quite clearly on 80m but Mike couldn't hear Eric. Unfortunately, it appeared K8RAT couldn't hear Eric on 80m. Moving to 60m for the same test, Mike could still not hear Eric and Mike's signal was ESP-level weak in Eric's receiver.

Moving to 40m, Eric was rewarded with three replies in quick succession to his calls of "CQ POTA".

Moving to 20m, Eric again chose to concentrate on working stations who were participating in the 7th Call District QSO Party (7QP) and in about fifty minutes he worked seven stations. Because the last station came a full twenty minutes after the previous station was worked, and because the sky appeared to be ready to dump rain, Eric chose to call the activation complete with ten QSOs and tear down his station.

This was the first time Eric had chosen to deploy three radials with the 58' end-fed wire and he was a bit surprised to see that the best match the KX3's internal ATU could make on 20m was just about 2:1. As an experiment, Eric disconnected the "at right angle" radial, allowed the KX3 to re-tune, and was interested to find that the KX3 was able to achieve a 1.3:1 SWR. Was the better match due to increased ground-losses through the removal of one radial? More experimentation and research is in order.

As at several of his recent POTA activations, Eric was surprised at how quiet the noise floor was on all of the bands he tested. It is becoming clear that Eric's home station is receiving a significant amount of man-made noise, particularly on 20m and 40m.