Tar Hollow State Forest originated from the Ross-Hocking Land Utilization project of the 1930s. The purpose of the program was to locate families to more productive land, thereby enabling them to better sustain a living. Following termination of the project, the land was leased to the Division of Forestry, and finally transferred to the State in 1958. Tar Hollow is Ohio's third largest state forest, containing 16,446 acres.

A wealth of recreational activities is available at Tar Hollow State Forest. A 46-site primitive horse camp is located at the south end of the forest on Poe Run Road. Latrines are provided at the camp, but electricity and drinking water are not available. Radiating from the horse camp are 33 miles of bridle trails. All bridle trails are south of the fire tower.

A 22-mile network of hiking trails is located in the northern half of the forest.

Seventeen miles of paved forest roads and 14 miles of gravel forest roads provide a great opportunity for a scenic drive and allow good access to all areas of the forest.

Come to the North Country. Trek the hills and valleys. Stand on the shores of lakes & streams from glaciers 10,000 years before. Clear-flowing water, red/gold of autumn, a fairyland of snow, open prairies, and distant horizons paint the land. Historic sites along the way tell how America settled and grew as a nation. From North Dakota to Vermont, adventure is never far away. 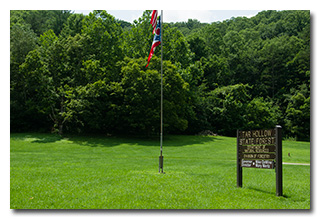 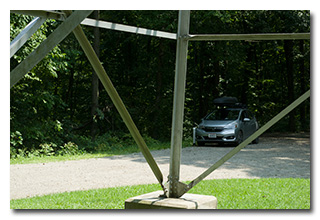 Eric arrived at the firetower within Tar Hollow State Park at about 1745 UTC, selected a parking place which offered both shade and a clear space for his mast, and quickly deployed his 28½' wire vertical on his 28½' wire vertical on his Jackite 31' telescoping fiberglass mast and drive-on mount. Because of his aggressive schedule, Eric set up his KX3 inside his car. Eric was on the air at 1759 UTC.

Eric was surprised to discover he had cell-signal at this location; he had been expecting to have no cell-signal whatsoever. The cell-signal was sufficient to all him to use the POTA Spots website (link) to spot himself and to look for possible park-to-park (P2P) QSOs.

Eric began operations by consulting POTA Spots and at 1811 UTC he made a P2P QSO on 30m with VA3RSA who was activating Bruce's Mill Conservation Area (VE-5093) in Ontario, Canada.

Finding his own frequency on 40m, Eric made three QSOs before being forced to move frequency because of the sudden appearance of a strong digital signal. On the new frequency, Eric quickly made eight more QSOs.

After pausing to check POTA Spots, at 1839 UTC Eric made a P2P QSO on 40m with KN3A who was activating Captain John Smith Chesapeake National Historic Trail (K-4567).

Returning to 40m to run a frequency, Eric made one additional QSO.

After pausing to check POTA Spots again, at 1845 UTC Eric made a P2P QSO on 20m with W9AV who was activating Lower Wisconsin State Riverway State Park (K-5643) in Wisconsin.

Finally, finding a frequency on 30m, Eric had a four-minute run which resulted in four QSOs.

In all, Eric made twenty QSOs, including three P2P QSOs. All of Eric's QSOs were CW and were made at the 5-watt level.

Eric had planned to climb the firetower for photos after the completion of the activation but was disappointed to discover that the tower's lowest ten stairs had been removed. 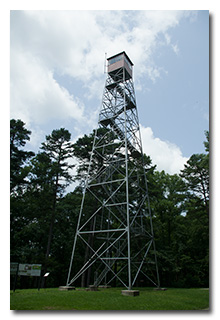 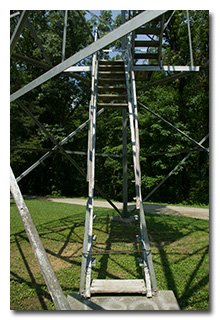