Sunfish Creek State Forest is located in the Ohio Valley along the Ohio River about four miles north of Clarington and three miles south of Powhatan Point. This 637-acre forest lies entirely within Switzerland Township, Monroe County. The forest is easily reached from State Route 7 on the east. 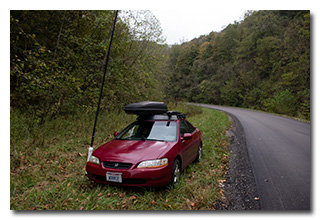 On Saturday, October 12, 2019, two members of the Southeast Ohio Radio Adventure Team performed a successful activation of Sunfish Creek State Forest in Ohio as part of the Parks on the Air (POTA; link) program while also participating in the ARP ARCI's Fall QSO Party. Eric McFadden, WD8RIF, and Miles McFadden, KD8KNC, performed that activation of Sunfish Creek State Forest following their visit to the Parkersburg / Wood County Hamfest. This was the first of three activations planned for the day.

Prior study of the state forest's website (link) and available maps had told Eric that finding an ideal operating location in the forest would be virtually impossible. Only one road runs through the forest, and the forest has no no trailhead parking areas or other facilities. (The state forest's website describes Sunfish Creek State Forest thus: "637 acres in Monroe County; steep terrain along the Ohio River with no facilities.")

After a drive of about ninety minutes through rain and drizzle from the hamfest in Wood County, West Virginia, Eric and Miles arrived at Sunfish Creek State Forest under clearing skies at about 1530 UTC and drove the single road that passes through the state forest, looking for a pull-off or other suitable location to set up the station. No pull-offs were found so Eric chose to try to use a wide and flat-looking shoulder area about midway through the forest, directly under two sets of high-tension power lines which, fortunately, were much, much higher than Eric's mast. Upon exiting the car, it became apparent that others, probably hunters, had used this shoulder for parking because the deep grass was hiding similarly deep ruts. Fortunately, the rain at this location hadn't been heavy and the ground wasn't too soft. Because of the cool temperature, lingering chance of rain, and the proximity to a well-traveled road, Eric chose to operate in the car and he and Miles deployed the 28½' wire vertical on the 31' Jackite telescoping fiberglass mast supported on the drive-on mount, the KX3 was hung on the car's glove-box door, and Eric was on the air at 1554 UTC. Despite the proximity to the high-tension power lines, all the HF bands of interest had low noise floors. 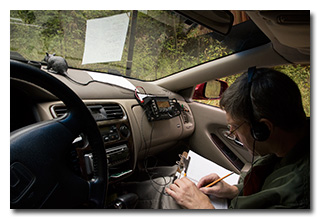 Wanting to give his good friend and fellow SEORAT-member K8RAT, Mike, a QSO, Eric started operations on 80m and a QSO with Mike was made almost immediately at 1554 UTC. Eric stayed on 80m for a while and a QSO was made with AA8NN at 1559 UTC and with VE3LDT at 1602 UTC. Subsequent CQ calls went unanswered and Eric changed to 40m at 1607 UTC.

Eric's first QSO on 40m came at 1611 UTC with KD1CT. QSOs with POTA Hunters came steadily with QSOs being made with N2ESE at 1612 UTC, with K4CAE at 1613 UTC, and with VE3ZN 1614 UTC. When subsequent calls of CQ went unanswered, Eric switched to hunt-and-pounce and made two QSOs with stations located in Pennsylvania participating in the Pennsylvania QSO Party.

Eric returned to 80m at 1647 UTC and made a QSO with his father, W8EOG, at 1653 UTC. With twelve QSOs in the log and with the scheduled departure-time approaching, Eric ended the activation after the QSO with his father and he and Miles tore down the station in order to drive to the next park, Barkcamp State Park (link).

Eric was disappointed that despite operating near the international QRP calling frequencies and despite sending the call "CQ QRP" as suggested for participants of the QRP ARCI Fall QSO Party, none of the stations he worked were participating in the Fall QSO Party. All of Eric's QSOs were CW and were made at the 5-watt level.