Shawnee State Forest, also called "The Little Smokies of Ohio," has developed into the largest of Ohio's state forests with over 60,000 acres. This working forest is managed to provide a variety of multiple uses on a sustained yield basis: Timber harvesting, tree planting, wildlife habitat, forestry research, watershed and soil protection, and production of tree seeds.

During the spring and fall forest fire danger periods, state forest crews detect and suppress wildfires that occur on state and private lands within the surrounding protection area.

Nearly 8,000 acres of the forest have been designated as wilderness. Timber is not managed and public motorized travel has been eliminated in the wilderness area. 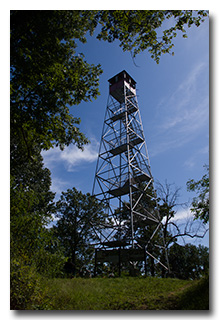 On Sunday, September 16, 2019, one member of the Southeast Ohio Radio Adventure Team performed a successful activation of Shawnee State Forest in Ohio as part of the Parks on the Air (POTA; link) program. Eric McFadden, WD8RIF, was accompanied by his wife Vickie, KC8MAJ, and their two small dogs, Theo and Mindy, and performed the activation directly underneath the 60' Copperhead Lookout Tower, which was built in 1924, and was the first fire tower built in Ohio.

After losing about fifty minutes at the Athens Kroger Pharmacy because of a prescription, the quartet arrived at the Copperhead Lookout Tower about 1640 UTC and discovered there's no parking immediately adjacent to the fire tower. Eric parked the car in a nearby pull-off and he and Vickie made several trips carrying picnic items and Eric's gear from the car to the base of the fire tower. (Upon departure, Eric and Vickie discovered a large, level parking lot about 500' further down the road.) After a brief survey, Eric decided to lash his MFJ-1910 33' telescoping fiberglass whip to one of the posts supporting the informational sign at the base of the fire tower. Eric deployed his 28½' wire vertical on the mast and set up his KX3 on his folding camp-chair. Eric was on the air at 1707 UTC.

Eric was pleased to find a smidgen of cell-signal so he sent a text to his friend and fellow Radio Adventure Team member Mike, K8RAT, to arrange a QSO on 80m. Eric could hear Mike's signal well enough for a QSO but Mike couldn't hear Eric at all, so no QSO was made. 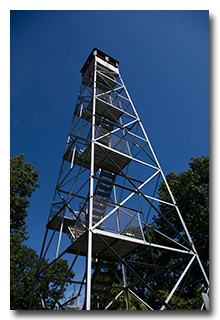 Switching to 40m, Eric's first QSO there came at 1711 UTC with VE3LDT. QSOs on 40m came slowly and Eric's sixth QSO on 40m came at 1730 UTC with AD0YM. Subsequent calls of "CQ POTA" by Eric after this point went unanswered.

Eric texted Mike again in the hopes of better conditions on 80m but, again, Mike was unable to hear Eric on 80m.

Eric was happy to have made enough QSOs to validate his activation but was disappointed that only one of the stations worked was one he recognized as being a POTA Hunter: VE3LDT.

Following the activation, Eric climbed the fire tower and was startled to find that the room on top was open for public access. This is the first fire tower Eric has ever encountered where the room was open. 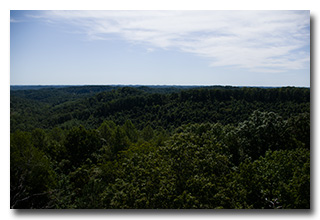 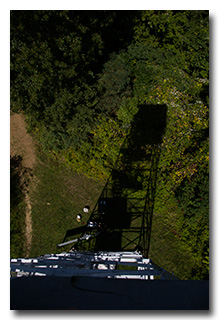